Remembering Ray Price, The Country Hall of Famer Known For “For The Good Times” 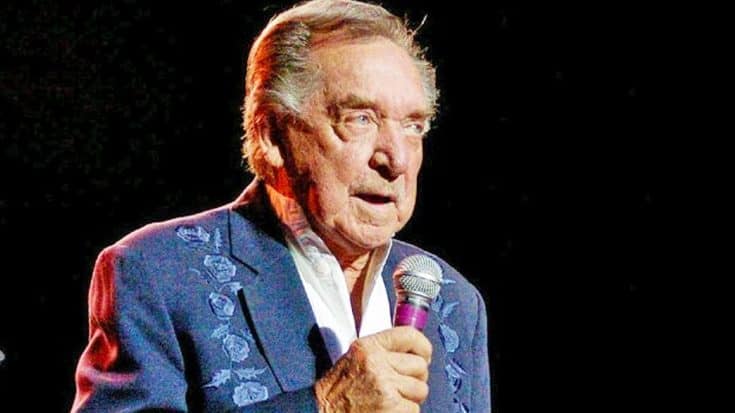 A Bit Of Backstory On A Country Legend

When Ray Price passed away on December 13, 2013, one of the golden voices of country music died along with him. But today, that voice lives on through his many memorable songs and performances.

48 years ago Ray Price's "For The Good Times" hit #1 on the Billboard country albums chart for the first of nine weeks. #MusicIsLegend pic.twitter.com/8Z1bJkmr5M

Price was born on January 12, 1926 in Wood County, Texas. He started singing and playing guitar during his teenage years, but originally went to college to pursue a career as a veterinarian. After being drafted into World War II and returning to finish college, Price decided not to continue on to vet school, choosing instead to pursue a career in music.

His decision led to a more successful career than he probably ever could have imagined. Price got started on a radio show called Hillbilly Circus before moving to Nashville, where he roomed with Hank Williams for a short time.

Following William’s passing, Price managed his band, The Drifting Cowboys, and experienced chart success with the song “Release Me.”

As Price continued on in his career, he became one of the champions of 1950’s honky tonk music, and also developed what became known as the “Ray Price Shuffle,” which is a 4/4 arrangement of honky tonk with a walking bassline.

Price was also known for his deep, baritone voice and wide range, oftentimes being praised as one of the best male singers in country music history. When you browse through the songs below, you’ll understand why.

“You’re The Best Thing That Ever Happened To Me”

Written by songwriter Jim Weatherly, “You’re the Best Thing That Ever Happened to Me” experienced success at two different times in two different genres. The first time the song became a hit was when Price released it in July 1973.

After a three month climb up the charts, Price’s version of the song hit number one on the Billboard Hot Country Singles chart. The song was Price’s seventh number one hit, and was also the number one single on the debut program of the radio show “American Country Countdown.”

R&B artists Gladys Knight & the Pips went on to record their own version of the song a year later, which made its way to the third spot on the Billboard Top 100. A few other artists have gone on to release their own covers of the song in years since, but Price’s remains as the most recognizable version.

“For The Good Times”

Originally written and recorded by Kris Kristofferson for his debut album in 1970, Price went on to release his rendition of “For the Good Times” later that same year.

The single was Price’s fifth number one, and crossed over to the Billboard Top 100, where it peaked at the 11th spot. Although Price had other songs cross over, “For the Good Times” was his only single that broke the Top 40.

In total, Price’s version of “For the Good Times” spent 19 weeks on the Billboard country chart. All of the song’s chart success led to it receiving the award for Song of the Year at the ACM Awards.

Following Price’s release of the song, dozens of artists from multiple genres have released their own versions. Some of the most notable country renditions of the song have been recorded by Dolly Parton, Willie Nelson, and Crystal Gale.

As more and more artists continue to record “For the Good Times,” it’s clear how much of an affect Price had not just in country music, but the music industry as a whole.

Price’s golden voice will forever live on through his songs such as “You’re the Best Thing That Ever Happened to Me,” “For The Good Times,” and many more.

We’d like to thank Price for all of “the good times.” May he rest in peace.