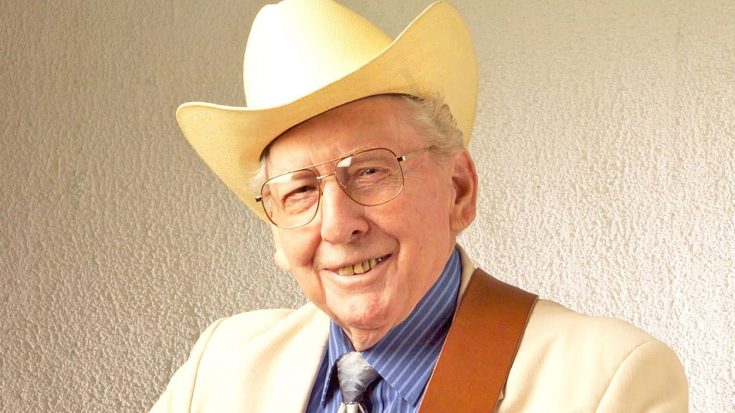 Born on Christmas Day in 1919, John Ray Sechler was the fourth of eight children born to Calvin and Carrie Sechler. Nicknamed “Curly” at a young age, the boy grew up in a home that didn’t have running water or electricity. But the one thing the home did have was music, and lots of it.

Curly’s father knew how to play the autoharp, harmonica, and fiddle, while his mother played the guitar and organ. As a child, he spent a great deal of time learning how to play music under the direction of his parents.

When Curly was only nine years old, his father passed away, leaving Curly and his siblings to help their mother with the family farm. In order to be a greater help, Curly dropped out of school after the sixth grade.

Although he was busy working, Curly still took the time to learn music whenever he could. After working in cotton mill as a teen, he saved up enough money to buy a banjo. Once he learned how to play, he joined his brothers to form a band called the Yodeling Rangers, and they eventually earned a daily radio program.

In 1939, Curly was discovered by bluegrass musician Charlie Monroe, who hired him to sing in his new group. Curly eventually changed the spelling of his last name, and was known professionally as Curly Seckler.

Curly’s time with Charlie’s band brought him some notoriety in the bluegrass world. By the time 1949 rolled around, he had joined Lester Flatt and Earl Scruggs‘ Foggy Mountain Boys. He remained with the group until 1962, and recorded over 130 songs with them, such as “Salty Dog Blues” and “Roll in My Sweet Baby’s Arms.”

In 1971, Curly’s career took off in a new direction when he released his debut solo album, Curly Seckler Strikes Again. Two years later, he joined Lester’s new band the Nashville Grass. When Lester passed away in 1979, Curly became the leader of the group, and remained in that role until he retired in 1994.

Although he was retired, Curly continued to play and record music. He was active on the festival circuit, and also released some new albums. His latest, Bluegrass, Don’t You Know, was released in 2006.

Two years prior to the release of his last album, Curly’s contributions to the bluegrass genre were recognized when he was inducted into the Bluegrass Hall of Fame. In 2010, he became a double hall of famer when the North Carolina Music Hall of Fame included him in its rank of inductees.

The last time Curly ever appeared on television was in 2011, which was when he performed on The Marty Stuart Show. Curly had served as a mentor of sorts to Marty, who played with him in the Nashville Grass:

“He was irreplaceable. He didn’t cuss, he didn’t smoke, he didn’t drink, he didn’t talk bad on anybody, he didn’t cheat on his wife…they don’t make them like that any more,” Marty said during an interview with The Tennessean.

On December 25 of this year, Curly celebrated his 98th birthday. The next day marked his 19th wedding anniversary with his wife, Eloise.

Sadly, Curly passed away the day after his anniversary. His death was confirmed in an article published by The Tennessean.

Curly is survived by his brothers, Floyd and Hugh, his sons Ray and Monnie, and his many grandchildren and great-grandchildren. As of press time, details concerning his funeral are still pending.

The world has lost one of its greatest bluegrass artists, and we’ll miss him dearly. But we know that his legacy will live on. As Stuart says, “Look at his body of work. It’s all timeless.”