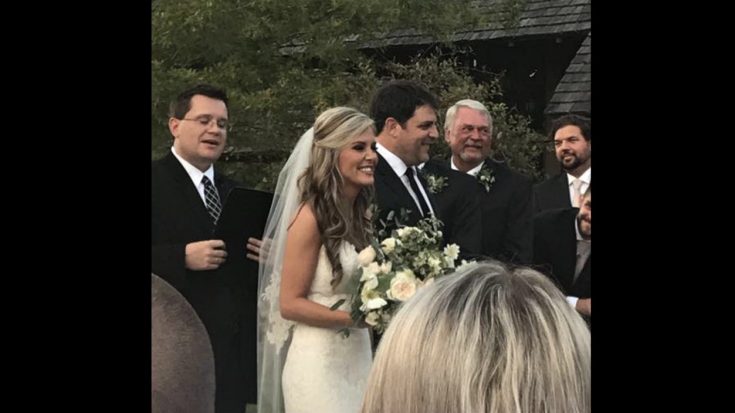 Akins, father of country superstar Thomas Rhett, proposed to Mansfield in Times Square on New Years (2017), according to a social media post made by the bride. The two met ten years ago and had been dating since at least 2015.

Guests who attended Saturday’s wedding shared photos online of the occasion that took place in rural Tennessee. The bride and groom said their vows outdoors as they overlooked a small pond. Guests were seated on benches to witness the event.

Thomas Rhett’s daughter, Willa Gray, served as flower girl and donned a white dress and hair wreath as she made her way down the aisle with the help of her dad.

Thomas Rhett and his wife, Lauren, shared a photo of their “happy (& tired, but mostly happy) little family” enjoying the wedding festivities.

Rhett Akins first made a name for himself in the mid-’90s with singles such as “Don’t Get Me Started” and “She Said Yes.” In the 2000s, Akins began writing songs for other artists and has placed at least one song on Billboard’s Country Airplay chart every week for the past seven years, according to Warner/Chappell Nashville.

Akins’ songwriting credits include Blake Shelton’s “Honey Bee,” Luke Bryan’s “I Don’t Want This Night To End” and “Huntin’, Fishin’ and Lovin’ Every Day,” Jason Aldean’s “When She Says Baby, Thomas Rhett’s “It Goes Like This,” Dustin Lynch’s “Small Town Boy,” Easton Corbin’s “A Girl Like You,” and Jason Aldean’s “Tonight Looks Good on You” and “Just Getting Started.”

Akins has also received 29 BMI Awards over the course of his career and has twice been named BMI Songwriter of the Year.

Congratulations to Rhett and Sonya Akins!