Ricky Stenhouse Jr. Finally Opens Up About Danica After Breakup

By Manly Bryant on January 24, 2018
Advertisement 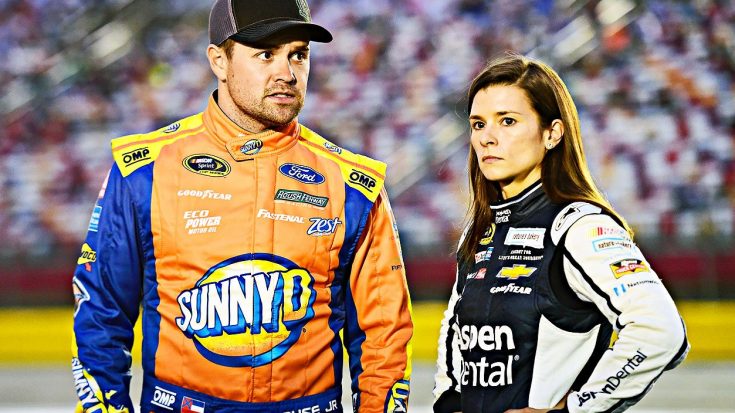 They broke up and she found a new man (Aaron Rodgers), but how does Ricky Stenhouse Jr. feel about facing off against his ex-girlfriend in NASCAR‘s season opener?

Stenhouse opened up about Danica Patrick and her final moments in the sport that brought them together. In his interview during NASCAR’s media days, Motorsport.com reports that he spoke on more than one topic of her life and how he feels about everything going forward.

His first statement addressed having to be on the same track as Patrick for the Daytona 500 on February 18th, 2018. It’s during that race that he will see her for both the first time since they called it quits on a five-year relationship – and for the last time in the sport they both loved.

“I try to respect everyone around me, especially at the speedway races,” Stenhouse said, reservedly. “I don’t really want to put anybody in a bad spot because then you put the whole field in a bad spot. I think I’ll go out and race just like I race everybody else and see how it plays out.”

With her old sponsor, original crew chief, and a whole new racing team backing her for the Daytona 500, Patrick is making waves in the industry and going out with a bang before starting her new life focused on many other ventures.

Stenhouse spoke openly about the possibility and history of crashing into Patrick on the track in her final hours, saying “It is what it is.”

“Heck, when we first started racing together, we got in crashes anyway. It is what it is. I’ll just go out and race as hard as I can. I plan on putting myself in a position to win the race. If it helps me, I’ll help just like the way I do everybody else out there. If I can help and it’s going to benefit myself, then I will. I try not to help people if it’s only going to benefit them on the race track.”

While neither NASCAR driver has spoke about the end of their love for one another, they both appear in good spirits and to have ended things in an apparently amicable way.

Stenhouse says that he supports her in how she’s choosing to leave the sport – even calling it “pretty cool.”

“I think it’s a cool way to go out if you’re going to retire for someone that’s done the Daytona 500 running NASCAR,” he said. “Running IndyCar, her passion has always been the Indy 500. So I think it’s cool for that to be her last race and to hit the two biggest races of the year, really, in the same year will be pretty cool.”

While he’s all for her final race being a great one, he’s still got his sights set on winning!

What do you think about his views on this situation?

Watch Ricky Stenhouse Jr. speak about Danica Patrick’s choice to leave NASCAR in the video below.