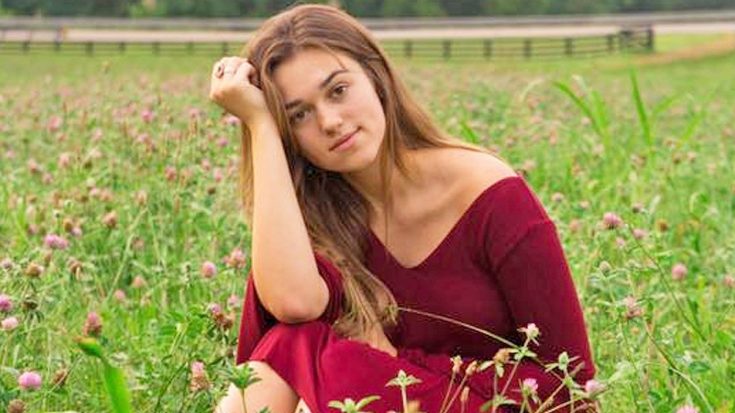 Sadie Robertson has amassed an impressive following in the years since her family’s reality show, Duck Dynasty, premiered. The smiling, dimpled darling of the Robertson clan has become well-known as a public speaker in recent years and has been brutally honest about her real-life struggles. But, there is one struggle that Sadie kept hidden…until now.

In a candid blog post, the 20-year old actress revealed that she fought a yearlong battle with an eating disorder. Sadie shared that the disorder started the year after she competed on (and nearly won) Dancing with the Stars.

“It was dark. It was ugly. It was insanely difficult. It was done in secret. It was hidden. I did not even tell my own mother until recently,” Robertson wrote. “I thought I had everything under control. Maybe you have been saying that same thing? I didn’t even realize this small problem that I thought I had under control was creating a ripple effect, creating more and more problems, ones I certainly couldn’t control. I became angry with the person I was becoming. My self-worth was demolished, and I began to lose sight of my true identity.”

Robertson detailed how her negative body image became an obsession.

“At least five times a day, I would wrap my hands around my thighs, making sure they hadn’t grown beyond what I could reach,” she wrote. “I knew each little calorie that was in every bite of food I took. I talked about food all of the time. I hid behind the talk, and I actually hid behind encouraging others.”

With a wisdom well beyond her years, Sadie speculated that her eating disorder may have been caused by a need for control.

“I have heard it said that people develop eating disorders because it is something they can control in their life,” Sadie wrote. “That makes so much sense in my case, because during this particular time, so much in my life felt out of my control.”

Robertson turned to her Christian faith to help her overcome those isues and encouraged her fans to focus on inward beauty rather than outward beauty.

“The day I prayed for the Lord to enlighten my eyes to see His standard of beauty, is the day my whole life changed,” Robertson wrote. “But like I have said many times, in order to experience God’s beauty, you have to exhale your ugly. My heart beats behind that quote. Do these old thoughts come back from time to time? Absolutely, but it is my job to take authority over them.”

Now that Sadie has recovered from her eating disorder, she claims that she is happier and more content than ever.

“Here’s the funny thing — now I am happy to do an all natural photo-shoot, and the reality is, I am 15 pounds heavier then I was right after ‘Dancing with the Stars,'” she wrote. “I literally cannot even wrap my head around how I was once able to get my hands to wrap around my thigh.”

You can read Sadie’s blog post in its entirety by clicking here.