By Darin Blue on February 19, 2015
Advertisement 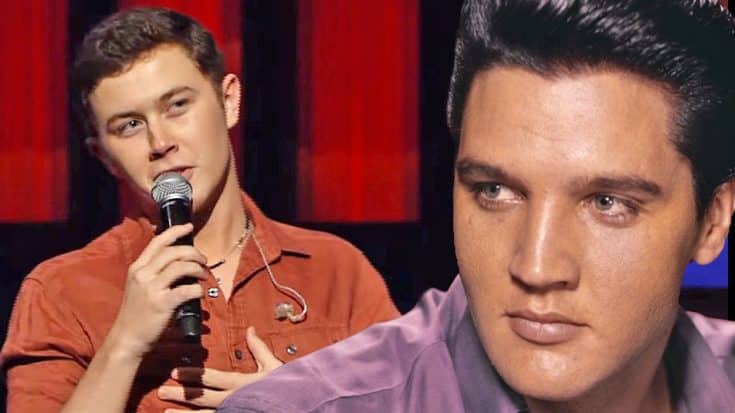 Scotty McCreery always has something amazing up his sleeve when he performs at the Grand Ole Opry, and one of his 2013 shows was no exception. That time, Scotty decided to entertain the crowd with a song they all knew well, “That’s Alright” by Elvis Presley.

Although “That’s Alright” was originally recorded by Arthur Crudup, Elvis’ version is the most well-known. In fact, it became his first single, and his version is now considered the 113th greatest song of all time, according to Rolling Stone.

Scotty has been a lifelong fan of Elvis, so we weren’t surprised when he decided to pay tribute to “The King” during his Opry show. But before he did, Scotty spoke of the impact Elvis’ music had on his life.

“One of the biggest guys I listened to growing up, and the guy that probably had the biggest influence to me, was the King of Rock and Roll himself, Mr. Elvis Presley.”

Of course no one can perform “That’s Alright” like Elvis, but Scotty did a mighty fine job. His stage presence was just as powerful as his signature deep voice. In fact, he even threw in a couple of small dance moves that made a few gals in the crowd go wild.

We feel like Scotty made his idol proud with his version of “That’s Alright.” Watch his performance below and let us know what you think!

Scotty could make a whole album of Elvis covers if he really wanted to. Which song would you love to hear him sing?