By Miranda Raye on January 9, 2017
Advertisement 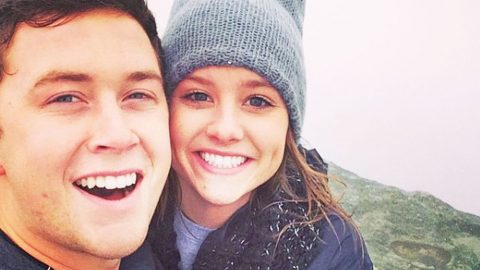 Scotty McCreery has won the hearts of country fans far and wide with his deep voice and charming personality. But years before he became famous, he also won the heart of a sweet country gal named Gabi Dugal.

McCreery and Dugal grew up together, after they met one another in kindergarten. They remained close throughout their school years, and eventually started dating after McCreery won American Idol in 2011.

Now, McCreery and Dugal are arguably one of the cutest couples in country music. McCreery shares sweet snapshots of his lady love on a regular basis, but one photo he posted on Saturday (January 7) takes the cuteness cake.

While McCreery and Dugal have gone on many adventurous dates in the past, like hiking on some dangerous-looking cliffs, they kept things more low-key for their Saturday date night. Since the January weather is also a bit uncooperative when it comes to planning outdoors dates, McCreery and Dugal decided to stay cozy and warm inside.

McCreery shared a snuggly photo of the couple’s date night, which is too cute to even begin to put into the words. In an attempt to keep warm, the couple donned their coziest clothes…some adorable onesies!

Dugal made for a sugary-sweet Cookie Monster, while McCreery stayed cuddly warm in a Chewbacca onesie. Standing close to each other, the two showed off their big smiles for the camera.

“I love snow, but only rain so far,” McCreery wrote. “Must be too much heat here in town cause of us in the onesies.”

I love snow, but only rain so far… must be too much heat here in town cause of us in the onesies @gabidugal ¯_(ツ)_/¯

We just can’t get enough of these two!

Over the years, Dugal has appeared in two of McCreery’s music videos, including the one for “Feelin’ It.” See more of their cuteness in action when you check out that video below!