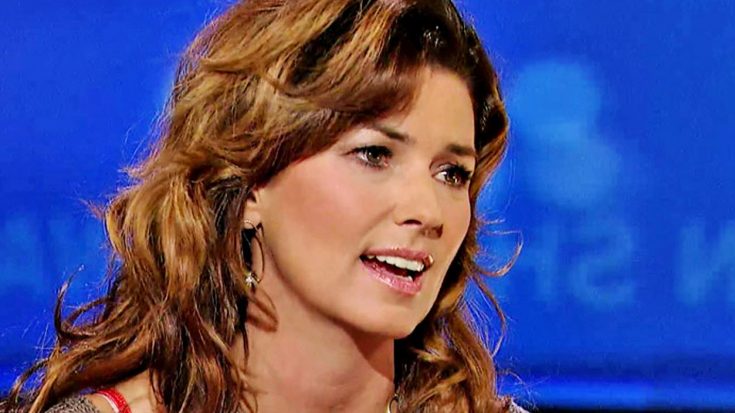 After sending fans into a complete frenzy following a recent talk show interview, it appears that the country-pop queen is slipping out a few details on her highly-anticipated first new album in more than 15 years.

Shania Twain has been a treasured superstar in both country and pop genres for decades, with iconic worldwide hits that nearly everyone has heard at least once in their life. Selling more than 85 million records, Twain has earned herself a spot as one of the top-selling music artists of all time.

Following a lengthy hiatus, Twain announced that she was working on a new album and had secured producers for the project she called “soul music”. The album, which remains untitled, was originally slated for a released in May 2017.

Just before Twain’s scheduled appearance on James Corden’s late night talk show, she tweeted out her excitement to sit down and talk about her new music project with him, saying, “Looking forward to talking new music with [James Corden] on [The Late Late Show] tomorrow.”

Once the episode aired on April 17th, 2017, fans were disappointed to find out that she didn’t speak about her new album at all – and instead the talk show segment avoided the topic completely. No reason has been named as the cause for this by either party.

Through an article from The Orange County Register, published one day later, Twain actually did speak about her new music, albeit briefly.

While she opened up about some of the darker parts of her past, finding her new voice after discovering lesions on her vocal chords, and other topics, Twain’s admission about her new album left many fans in the lurch.

“This was an exercise in independence,” the country star explained. “I really just wanted to test myself and push my limits and face my fears. I haven’t worked alone in a really, really long time after all of those years of being partnered with Mutt professionally. It was a huge leap of courage for me to do this alone and I knew I was going to be carrying the weight of it alone, too. I just kept challenging myself and telling myself ‘OK, you’re going to write this album and we’ll find out what you’re made of these days.’”

Her untitled album has now been delayed until “early fall” according to the publication, but like many have already reported, she will be debuting some of her new music this coming weekend at the Stagecoach country music festival in Indio, California.

Opening up further about her latest musical project, Twain revealed several of her new songs titles and subject matter, saying, “The choruses in both of those songs are very celebratory and very happy. They’re optimistic. I love the contrast in those songs and this album overall is honest and touches on a lot of candid phrases and wordings of things, but at the same time it still takes me to a place where I can see the light at the end of the tunnel and that’s actually where I’m at right now.”

The songs she was speaking about will be included on the new album and are titled, “Life’s About to Get Good”, “I’m Alright”, and another will be called “Light of My Life”.

We are thrilled to hear her excitement to perform at Stagecoach, and can’t wait to hear what her new voice and music sound like following her concerts at the festival.

Watch the clip below of her recent visit to James Corden’s talk show and let us know what you think about this in the comments.