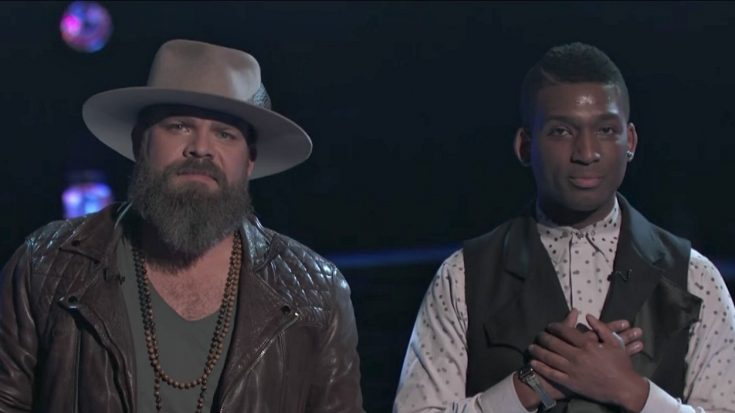 It was an emotional night on The Voice as the Top 12 became the Top 11 after the show’s first round of live performances.

On Monday night’s live episode, the remaining three hopefuls from each team sang their hearts out in an attempt to stay in the competition. During Tuesday’s elimination episode, one singer was sent home and the result caused some fans to cry foul.

Adam Cunningham and Jon Mero, both members of coach Adam Levine’s team, found themselves in the bottom two. Cunningham’s status was in part because he struggled through his performance Monday after he stumbled over the first lines of the song’s lyrics.

Jon Mero delivered a flawless performance Monday and was 5th in iTunes sales out of the Top 12 this week.

Both men were up for the Instant Save, an opportunity for the public to vote via Twitter for the contestant they would like to keep in the competition. When Carson Daly announced that Jon Mero was eliminated, his fans took to social media to show their outrage and brought attention to the fact that the hashtag used to vote for Mero was trending on Twitter, meaning that the singer was receiving a great deal of votes.

He was 5th highest vote getter of the top 12 on iTunes today. how is this possible? that many people bought his song but didn’t vote too?

I’m still mad and in shock ??. I couldn’t watch the show tonight and when I opened Twitter and saw a #VoiceSaveJon mention I genuinely thought it was a joke. You shouldn’t even have been in danger tonight. So sad to see you go. I admire your class in all this. God bless! ❤

@patrev3 I don’t understand how Jon Mero was trending #voicesavejon and he got eliminated? I also didn’t see any #voicesavejon‘s to retweet. What’s up with that?

As with any competition, there will always be some who disagree with the outcome. At this point in The Voice every single elimination will be heartbreaking as the show is jam packed with talented artists who have spent weeks growing their dedicated fan base.

Who do you think will win Season 13 of The Voice?