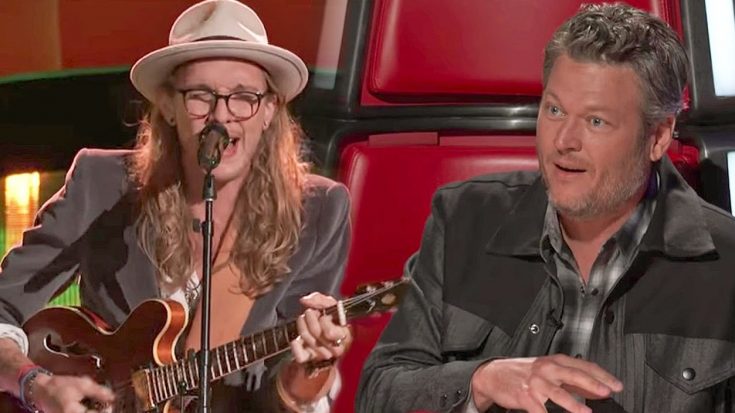 Adam Thought He Had This One In The Bag

When Nashville rocker Dennis Drummond started singing on The Voice, we’re sure Adam Levine thought that he had him secured for his team. He turned around within seconds of hearing him sing The Black Crowes’ “She Talks to Angels,” and for a while, it seemed he wouldn’t have to fight for him.

But that all changed toward the end of Drummond’s performance when Blake Shelton slammed his button and turned his chair around. Levine was obviously disappointed, but felt he had the upper hand as he and Shelton began battling over Drummond.

Levine started off by asking Shelton who “She Talks to Angels” was by, thinking that he wouldn’t have any clue. Much to his surprise, Shelton fired back with the correct answer right away.

Blake Covered This One Way Back

There’s a good reason for that…Shelton once covered “She Talks to Angels” during an acoustic session, and his version is one of the most well-known covers out there.

As the coaches kept talking to Drummond, they learned that he has played guitar for former Voice contestant and Team Blake member, Adam Wakefield. With that connection, his Nashville ties, and Shelton’s knowledge of The Blake Crowes, things weren’t looking good for Levine.

So How Did This All Play Out?

In his typical fashion, Levine proceeded to praise Drummond as a performer before he expressed his frustrations about Shelton.

“You were singing it your way, and it was really cool,” Levine said. “So I just felt connected to you right away, so I turned around. And then I was mad because this nitwit turned around.“

Shelton took the insult like a champ, and followed up by talking about how diverse the music scene is becoming in Nashville. He explained how it’s no longer all about country music, saying, “I love the fact that there’s different genres that are coming there.”

Even though Shelton made some good points, it appeared that Drummond shared a stronger connection with Levine. Even Miley Cyrus told Shelton that she felt he had lost his chance to have Drummond on his team.

So who did the soulful rocker choose? Tune in to the clip below to enjoy his performance, and then you’ll find out the coach he went with!

Based on this performance, we’d say that Drummond was definitely worth fighting for!