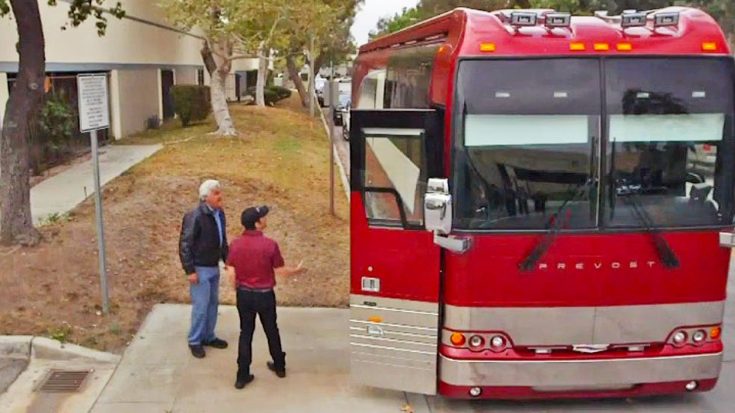 Since country music artists spend a lot of time out on the road, it’s essential for them to have a comfortable and good-lookin’ tour bus. This is something that Brad Paisley was well-aware of when it came time for him to design his own bus.

As far back as he can remember, Paisley has always been a “car guy.” Even though he’s had a love of automobiles for years, he wasn’t always able to buy the car of his dreams. As he told Jay Leno an episode of Jay Leno’s Garage, his first car was less than glamorous.

“I actually sang and I played a lot of acoustic shows,” Paisley said. “I would get a couple hundred bucks every time. Before long, I had $3,000 dollars, and I bought my Chevy Cavalier.”

The 1984 Cavalier was a far cry from Paisley’s dream car…a Corvette. He told Leno he had wanted one since he was young, so once he hit country superstardom he was quick to snatch one up.

“I guess it was in the 2000s, I bought a used ’99 C5. Great car!” he said, “To me, [it’s] the most iconic American automobile. It just really is the flagship for our country. When you come back from the war, you should be given a Corvette!”

Even though Paisley had a 1999 Corvette, the 1958 model is he favorite. He loves the car so much in fact, that he had his tour bus custom-made to resemble one.

In his guest appearance on Jay Leno’s Garage, Paisley welcomed Leno on his insanely detailed tour bus. The rolling work of automotive art cost a total of $1.74 million, and was made in 2012.

As a car enthusiast, Paisley is certainly a fan of the bus’ 1,650 foot-pounds of torque and maximum horsepower of 515. Just as impressive as the technical specs is the appearance of the bus. The outside is sharp and sleek, with red, white, and silver markings. But just wait until you see the interior!

The Corvette theme continues throughout the inside of the bus. Black leather seats line the walls, and chrome details accent the cabinets and drawers. Paisley didn’t leave any detail unturned, and even went so far as to include a checkered flag pattern on the floor of the bus’ main room.

What are you waiting for? Go ahead and take a step inside Paisley’s jaw-dropping bus by watching the video below.

If you were a country artist and you could design your bus any way you wanted, what would it look like?