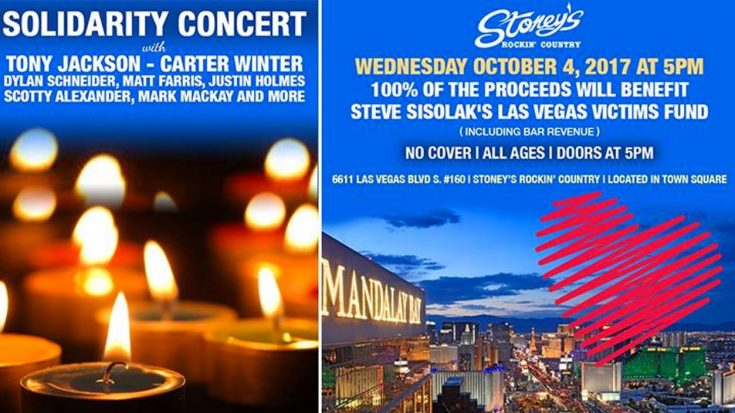 In the wake of immense tragedy and heartbreak following a mass shooting at Las Vegas’ Route 91 Country Festival on October 1st, a local beloved country establishment is working hard to help all of those affected.

Stoney’s Rockin’ Country has been a huge part of the Las Vegas country music community for years and “has been rocked to [their] absolute core from the heinous and monstrous attack” on the people they have welcomed with open arms.

With 59 people killed and more than 500 injured during what is now known as the deadliest mass shooting in U.S. history, there is no shortage of folks who will need help in the coming days and months – and Stoney’s Rockin’ Country is doing everything they absolutely can to provide assistance.

Joining forces with classic country singer Tony Jackson, Stoney’s has announced a concert of solidarity from which 100% of proceeds will be donated to the Las Vegas Victim’s Fund. The concert will be free to enter, with the establishment accepting donations throughout the night and donating all bar revenue to the Las Vegas Victim’s Fund.

In a press release, Chris Lowden (long considered the mayor of country music in Las Vegas) spoke out about the inconceivable tragedy that had struck the people and city he loves the most.

“The Lowden family, including Chris and Toad, along with everyone here at Stoney’s Rockin’ Country has been rocked to our absolute core from the heinous and monstrous attack on not only our city, but our country music community as a whole.

This tragedy struck too close to home as many of our employees, their families, and our loyal patrons were present. Many were terrified, some were injured, and some did not make it. It is moments like these that compel us to band together and work toward the common good and be the light the world needs to see.

Our thoughts, sympathies, and prayers are with everyone affected by this devastating tragedy. God bless Las Vegas. God bless country music. God bless the United States of America.”