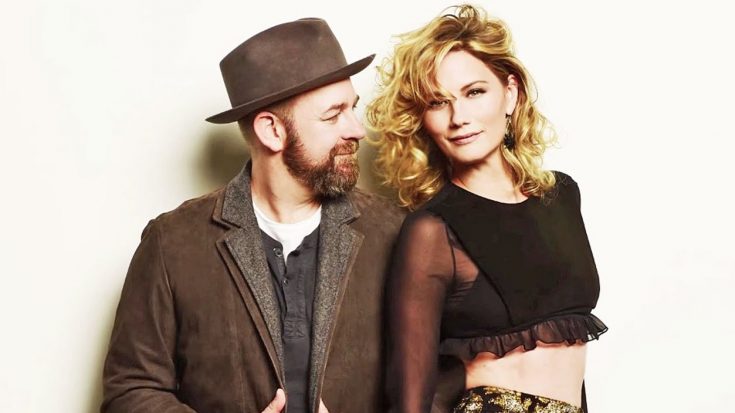 During the CMA Awards this year, country fans were thrilled when Jennifer Nettles and Kristian Bush appeared together to introduce the nominees for the Vocal Duo of the Year Award. It’s an award that the two singers are quite familiar with, since they won it several times as their duo, Sugarland.

But in 2012, Sugarland decided to go on an indefinite hiatus. Bush released his solo record Southern Gravity in 2015, and also served as a producer on Lindsay Ell‘s album, The Project. As for Nettles, she released two solo records, 2014’s That Girl and 2016’s Playing With Fire. She also released a Christmas album, appeared on Broadway, and starred as Dolly Parton‘s mother in the Coat of Many Colors films.

Since the duo had been apart for so long, their reunion at the CMA Awards was noteworthy. It became even more so when they hinted at the fact that they may end up winning the Vocal Duo of the Year Award again in the future.

Shortly after they made their appearance at the ceremony, Sugarland teased their fans with an photo that was simply captioned “#StillTheSame.” Everyone took this as a surefire sign that the duo was reuniting, and they were right on the money with those thoughts!

In the weeks that followed, Sugarland spoke about their intentions to release a new single before the end of the year. We eventually learned that single would be titled “Still the Same,” and that its release date was scheduled for Thursday (December 21). Well that day is finally here!

The release of “Still the Same” is big news for Sugarland’s fans, since it’s the first single the duo has released in six years. Their last single, “Tonight,” was released in April 2011, and reached the 32nd spot on the Hot Country Songs chart. The duo did appear on one more single after that, but only as featured artists. That single was “Run,” which was released by rock artist Matt Nathanson in November 2011.

“Still the Same” could be characterized as a love song, but it’s truly more about celebrating the strength of a relationship between two people, whether it be lovers or friends. In the chorus, Nettles and Bush ask if they can leave their relationship even better than it was before, adding, “Don’t be afraid to change, our love is still the same.”

As an extra treat for their fans, Sugarland also released a music video to go along with “Still the Same.” The video mixes current footage with clips from the duo’s past concerts and music videos, showing how far they’ve come since their early days. But this mix of footage also shows how they’ve never really changed, and how they’re still the same people after all of this time.

You can catch the newly released music video for “Still the Same” below. Once you’re done, let us now what you think of it. We’re so happy that Sugarland is back together at last!