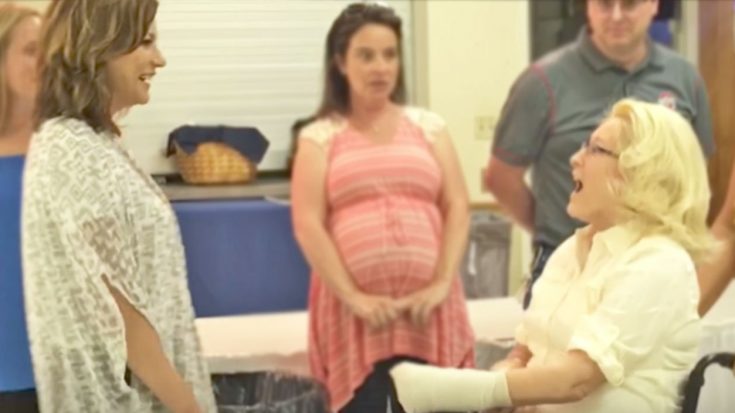 In 2011, country singer Martina McBride started a charity initiative called Team Martina. Over the course of the last few years, the charity’s name has been changed to Team Music is Love, but still has the same mission – to give back in many different capacities.

According to their website, Team Music is Love is involved in many different projects from hunger relief to cancer research to combating domestic violence to helping children in need to volunteering at hospitals to starting therapeutic music programs and “providing musical instruments to orphaned children at Covenant House shelter in Guatemala City.“

Through her charity initiative, McBride encourages fans to make the world a better place in their own home towns, and with her while she’s on tour by bringing people together through the power of music.

A fan named Sandy from Zainesville, Ohio became a four-limb amputee this past year and has been recovering at the Ohio State University Medical Center.

Sandy desperately wanted to be well enough to attend her favorite singer’s August 18 concert in Ohio. Her favorite singer happens to be Martina McBride. Her doctors and nurses contacted the “This One’s For The Girls” singer to see if she could do something extra special for Sandy, who has had an extremely difficult year.

McBride and Team Music Is Love organized Sandy a surprise party at the local VFW with her closest family and friends. When McBride walked in, Sandy didn’t recognize her, but when she said, “Hi, I’m Martina,” Sandy gasped and gave her a huge hug.

Sandy admitted to the camera that “you can’t not feel good listening to her music, it’s fantastic.”

The woman sitting next to her broke down in tears talking about what this moment meant to Sandy.

“Having Martina come has been a bright spot in a really tough year,” she said.

Watch the heartwarming moment where Sandy is surprised by her favorite singer below.