By Manly Bryant on August 17, 2016
Advertisement 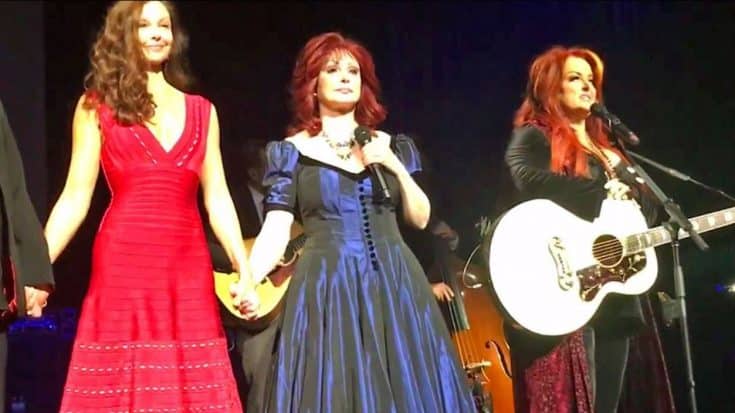 The Judds closed out their show at the Venetian in Las Vegas with an empowering performance of their moving song “Love Can Build a Bridge.” Ashley Judd and Wynonna Judd‘s husband, Cactus Moser, joined her and Naomi on stage for the beautiful performance.

“We wrote a song from a simple place in our broken heart,” says Wynonna to introduce the song. “It traveled the world and it’s healed so many people.”

The Judd family holds one another close during the performance as the audience sings overpoweringly along with them to the inspirational lyrics. The country ballad is about the importance for family to stand together during difficult times.

“When all your hopes are sinkin’ let me show you what love means,” they sing together. “Love can build a bridge between your heart and mine.”

“Love Can Build a Bridge” was released in December of 1990 as their second single from their album by the same name. The song performed successfully on the charts both in the US and internationally. Several other artists went on to cover the famous tune, including Cher, which helped the song reach No. 1 on several charts. Even more incredible, the heartfelt song went on to become a charity single for the Save the Children Fund.

The Judds are comprised of Naomi and Wynonna Judd and are regarded as one of the most successful acts in country music history, winning a total of five Grammys and eight Country Music Association awards. The duo has charted 25 singles on the country music charts with 14 hitting No.1 between 1983 and 2000.

You can watch the inspirational performance in the video below.