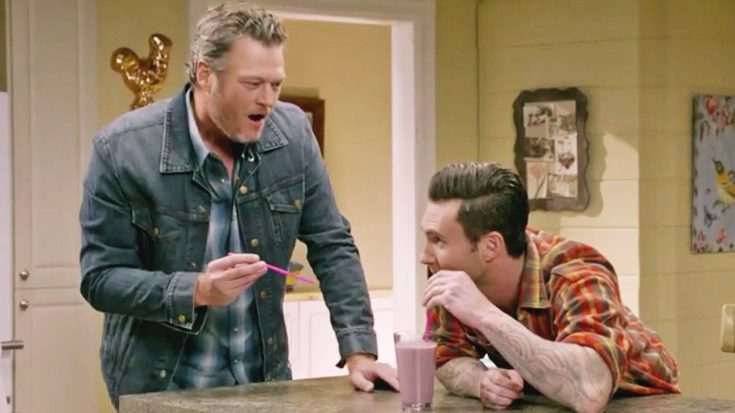 Season 11 of The Voice may have just wrapped up, but the coaches are already getting prepared for Season 12. The newest season of the hit singing competition series is set to debut in February, and will feature a different set of coaches in those famous red chairs.

Well, only one of those chairs will have a different coach in it than in Season 11. Blake Shelton, Adam Levine, and Alicia Keys are all set to return to their coaching duties for Season 12, along with former coach Gwen Stefani, who will take Miley Cyrus‘ place.

To get fans excited for the upcoming season, The Voice released a short promotional clip of the coaches bonding as one big, happy family. Styled like a sitcom intro, the clip introduces each of the coaches as they’re in the midst of doing something hilarious.

We’re introduced to Shelton first, as he attempts to walk in through the front door with his guitar case. However, he misjudges the size of his case, and ends up slamming it into the doorway. At least he was able to laugh at himself!

Real-life couple Shelton and Stefani get their own adorable moment together in the clip. When Stefani puts a glass of chocolate milk down on the counter, Shelton suddenly swoops in with a pink straw to drink it while her back is turned. But in a rib-tickling twist, Levine pops up after him with a straw of his own!

The clip ends with all four of the coaches snuggling up on the couch together, bowls of popcorn in hand. Overall, the entire clip is the perfect combination of funny and adorable.

Tune in below to see the new promo for The Voice, and prepare to laugh your head off!