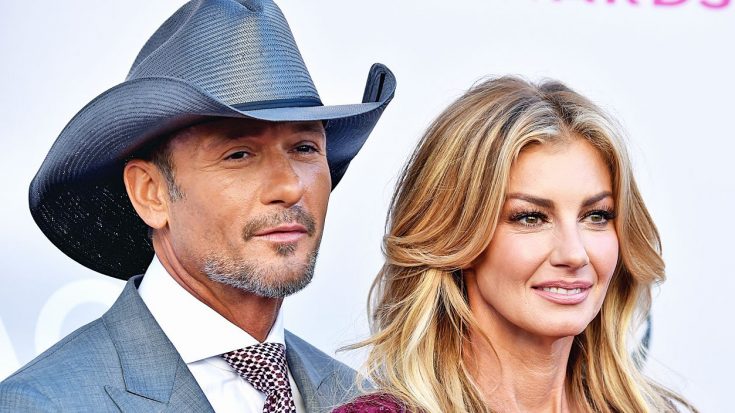 On Wednesday (January 10), The Hollywood Reporter published an article revealing that Tim McGraw and Faith Hill had been named in a copyright lawsuit that was filed in New York federal court that same day. The lawsuit concerns the couple’s newest single, “The Rest of Our Life,” which served as the title track of their 2017 duets album.

“The Rest of Our Life” was released on October 5, and made a decent showing on the country charts. It peaked at the 18th spot on the Hot Country Songs chart, while also claiming the 26th spot on the Country Airplay chart. As of December, the song has sold a total of 86,000 copies.

English singer-songwriter Ed Sheeran co-wrote the song with Steve Mac, Johnny McDaid, and Amy Wadge, which is about a couple looking forward to their future, singing of how as long as they’re together, they’ll “stay young” for the rest of their lives.

McGraw, Hill, and Byron Gallimore served as the producers on the song.

The lawsuit concerning “The Rest of Our Life” that names McGraw and Hill also names Sheeran, McDaid, Wadge, Sony/ATV, Universal Polygram, and WB Music. According to the lawsuit, which was filed by Australian songwriters Sean Carey and Beau Golden, “The Rest of Our Life” is “blatant copying” of their 2014 song “When I Found You,” which was recorded by singer Jasmine Rae and was popular in Australia.

In the lawsuit, it is alleged that the employees of Sony Music were aware that “The Rest of Our Life” was copied from “When I Found You.”

“It very well may have been an agent of Sony Music Entertainment who provided the other defendants herein with access to the Song,” reads the lawsuit.

It turns out that Rae’s boyfriend, Tim Holland, was a marketing director for Sony. Allegedly, Rae, Carey, and Golden got on a conference call and later spoke to Holland in person about “The Rest of Our Life” and how similar it sounded when compared to “When I Found You.”

According to the lawsuit, Holland was aware of “The Rest of Our Life” and was even in charge of promoting and marketing the song:

The lawsuit includes excerpts of both songs in an attempt to prove their similarities.

Carey and Golden are seeking at least $5 million in damages from those named in the suit, plus profits. They are also asking for a running royalty and an award of attorney’s fees and costs. When asked to comment on the lawsuit, Sony Music declined.

You can listen to “The Rest of Our Life” and “When I Found You” in the videos below. Can you hear any similarities between the two songs?