By Miranda Raye on October 5, 2017
Advertisement 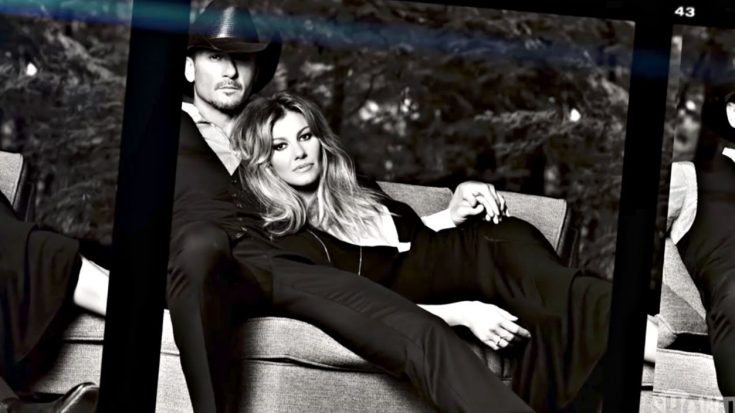 Married on October 6, 1996, the two superstars have kept their love alive when so many other couples can’t seem to make it work. They have an admiration for one another as artists, often collaborating to create hit duets like “I Need You” and “It’s Your Love.”

While you wait to see their forthcoming Showtime special and the release of their newest duets album, take a look back on some of Tim and Faith’s most romantic moments that have been caught on tape.

1. When Tim Broke Down While Talking About Faith

In 2014, Tim sat down for an interview with Oprah’s Master Class, which took an emotional turn once he started talking about his lovely wife. Speaking through tears, Tim said that although he admires Faith as a singer, he admires her most for being a good mother to their three daughters: Gracie, Audrey, and Maggie.

“I think about the fact that we’re married,” he said. “The fact that we have raised these three beautiful daughters, and then I think about having three daughters and having her for their mom. I mean, it’s a pretty cool thing for those girls to have her.“

2. When Faith Got Choked Up Singing “I Need You” To Tim

Tim is not the only one who has shown emotion when it comes to the love he shares with Faith. During a performance of their hit duet “I Need You” at the Gillette Stadium, Faith found herself getting choked up in the middle of the song.

Faith got so emotional that she actually has to stop singing at one point, but Tim didn’t mind. Instead, he just stood there and smiled at her, with a look of total adoration on his face.

3. When They Gave An Intimate Performance Of “I Need You”

Tim and Faith have recorded many romantic duets over the years, perhaps none more so than “I Need You.” As you’ve already seen, the song resonates so strongly with the couple that Faith couldn’t control her emotions when she sang it with Tim.

Although neither Faith or Tim broke down while singing “I Need You” at The Venetian in Las Vegas in March 2013, they did perform an intimate version of the song. Sitting face-to-face, Tim and Faith gazed into each other’s eyes as they sang – as if no one else was in the room.

4. When They Sang Back-To-Back In ‘Forever Country’

In honor of the 50th anniversary of the CMA Awards, the CMA put together an epic country mashup called “Forever Country.” 30 artists came together to sing three country classics, and Tim and Faith were two of the artists who stepped up to participate in the project.

It turns out that Tim and Faith sang back-to-back in “Forever Country,” and actually appear together in the music video. First Tim sings alone in a woods, then the camera switches to show Faith singing on the front porch of a house in the country before she finally meets up with Tim. She leaned into him as if she was going to kiss him on the cheek, and the smile on her face was full of love.

5. When They Announced Their Revamped Soul2Soul World Tour

Following the announcement of their Soul2Soul World Tour, Tim and Faith released a teaser trailer to get fans excited for the upcoming shows. The trailer radiates romance, as the couple can be seen walking hand in hand with one another and enjoying time on vacation together. Watching this trailer proves just how powerful Tim and Faith’s love really is. If it’s any indication of what to expect on their tour, then we’re sure Tim and Faith will have many more romantic moments in store for us in 2017!