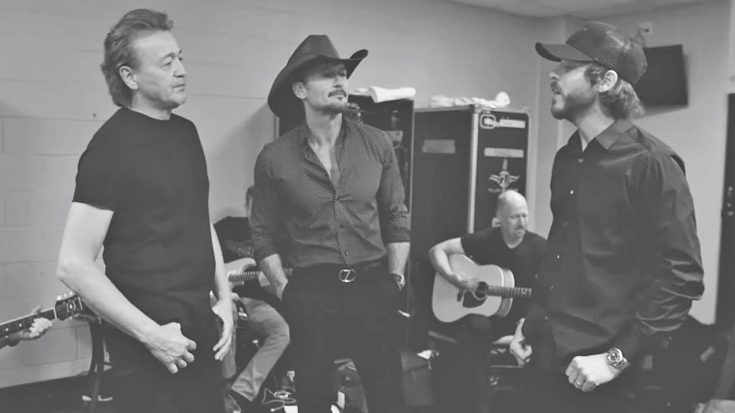 One quintessential classic country song is Merle Haggard‘s “Mama Tried.” Released in July 1968, “Mama Tried” was the first single off of Haggard’s album of the same title.

Written entirely by Haggard, the song is partially autobiographical. Although Haggard was never sentenced to spend life in prison without parole, he did cause his mother some anguish with his rebellious ways when he was younger.

“Mama Tried” became a major hit, and claimed the top spot on the country charts in both the U.S. and Canada. It later went on to be regarded as one of Haggard’s signature songs, and thus one of the best songs to ever exist in country music.

During his Soul2Soul Tour with wife Faith Hill, Tim McGraw engaged in some epic jam sessions behind the scenes.

McGraw often called on whoever the show opener was to help him out in these jam sessions. During one show, he enlisted the help of Chris Janson and Mark Collie to help him sing an old-school cover of “Mama Tried.”

McGraw shared a video of the trio’s backstage performance Shot in black and white, the video opens with McGraw singing “Mama Tried” solo while members of his band play along in the background.

Janson eventually joins in and sings along with McGraw on the chorus. Their voices mesh well together, and Janson’s naturally “classic” sound lends itself well to “Mama Tried.”

Collie jumps in later on, and McGraw and Janson stand by while he sings solo for a little while. The singer-songwriter shares a special connection with McGraw, because he has written songs for him before.

The trio concluded their performance by giving each singer a chance to perform a short solo part again. It’s clear they had a fun time, because everyone was grinning by the time the song was over. McGraw even let out an enthusiastic cheer, and proclaimed, “Thank God for country music!”

You’re sure to feel equally elated once you watch McGraw, Janson, and Collie sing “Mama Tried” in the clip below. We love it when modern artists sing classic tunes!