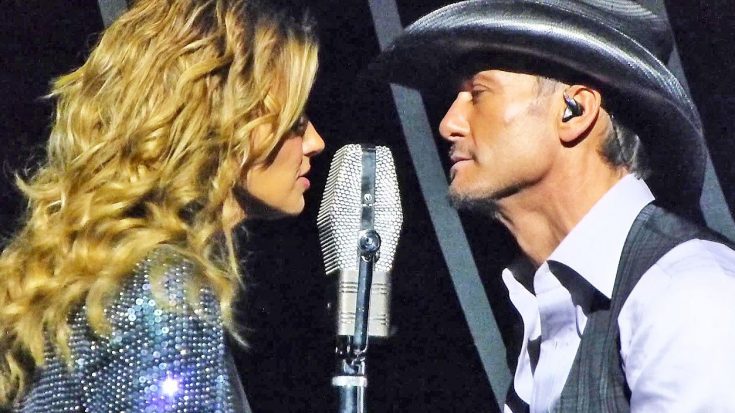 Tim McGraw and Faith Hill released their first duet, “It’s Your Love,” in 1997. The song, which topped the charts for six weeks, was just the beginning for the country music couple who would go on to shatter records with their chart topping collaborations and tours.

On October 6, their 21st wedding anniversary, Tim and Faith released a new single titled “The Rest of Our Life,” and announced the upcoming release of an album of the same name.

While fans were going crazy over the video for the new single, Tim was wishing his wife a Happy Anniversary with an adorable photo montage posted to social media. The video, captioned with the simple message “Happy anniversary baby. Got you on my mind,” shows a series of photos from the couple’s marriage including family photos and candid snapshots.

@FaithHill – “Happy anniversary baby Got you on my mind”

Tim and Faith’s relationship started while touring together in early 1996 and were married by October of the same year. Tim recently shared the story of how he proposed to Faith.

“We were in the dressing room, here, June 26, 1996, and it was raining and stuff and we’d been on tour for a while together, and I joked around with her about getting married. And so I said… I looked at her, grabbed her by the hand, and dropped forward [on my knees] onstage. She had already done her show. And I said, ‘I’m really serious. I want you to marry me,'” Tim recalled. “She said, ‘We’re at a country music festival in a trailer house, and you’re asking me to marry you? And I said, ‘Yeah.’ So I went onstage.”

After McGraw’s performance, he returned to his dressing room to find that Faith had responded to his proposal.

“I had in my dressing room… this foldout case that had a mirror in it that was my dressing armoire,” McGraw said. “I still have it to this day. When I came back offstage, [I saw] a Sharpie with lipstick kisses all over it, saying, ‘Yes! I’m gonna be your wife.’ It had, ‘I love you’ with big lipstick kisses. And this is the place right here.”

Just a few short months later, the couple wed in a top-secret wedding in Tim’s hometown in Rayville, Louisiana. In fact, the wedding was so secret that even the guests didn’t know they were attending a wedding. The duo invited friends for what they thought would be a softball game and concert and surprised everyone as they stood under an oak tree with a minister, ready to say “I do.”

In the 21 years since, Tim and Faith have repeatedly won us over with their love for each other and their family! Watch the couple’s new music video for “The Rest of Our Life” by clicking here.