By Miranda Raye on June 9, 2016
Advertisement 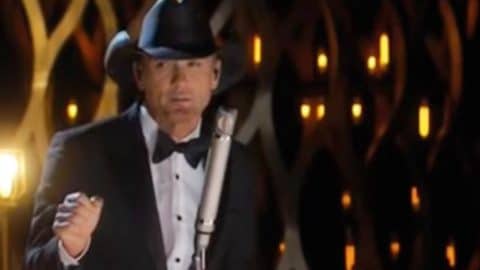 Glen Campbell is one of the greatest artists to ever grace country music. With iconic hits such as “Wichita Lineman” and “Rhinestone Cowboy,” Campbell earned the status as a country music legend.

After decades of singing and performing, Campbell received some heartbreaking news in 2011. He was diagnosed with Alzheimer’s Disease, but he didn’t let that stop him right away.

Before he lost his ability to sing, Campbell embarked on one final tour. That tour became the subject of the documentary Glen Campbell: I’ll Be Me, which detailed how Campbell handled his struggles with Alzheimer’s while out on the road.

Glen Campbell movie documentary 'I'll Be Me' available on Netflix. Lovely testament to a good man.

Campbell recorded one final song for the film, called “I’m Not Gonna Miss You.” Written by Campbell and Julian Raymond while Campbell was still in the early stages of Alzheimer’s, the emotional song served as his love letter to his wife and children.

At that time, Campbell’s Alzheimer’s had progressed to the point that he was unable to attend the Academy Awards’ in 2015. His wife Kim and daughter Ashley came to represent him at the ceremony, while another country star performed “I’m Not Gonna Miss You” in a powerful tribute.

That country star was Tim McGraw, who took a seat at center stage while dozens of brightly-lit bulbs surrounded him. Although a band played along with McGraw as he sang, he was the only person you could see out on stage, making the performance more intimate and personal.

At first, McGraw started off singing a cappella, giving you the chance to hear the raw emotion in his voice. The weight of the moment was clearly on his mind, as he poured his heart into every word.

McGraw’s devotion to his tribute resulted in a stunning performance that touched everyone who watched. Campbell’s wife and daughter seemed particularly moved, as they looked at one another with heartfelt smiles once he finished singing.

Something this beautiful deserves to be watched over and over again. Hats off to McGraw for delivering such a breathtaking tribute to country music’s “Rhinestone Cowboy.”