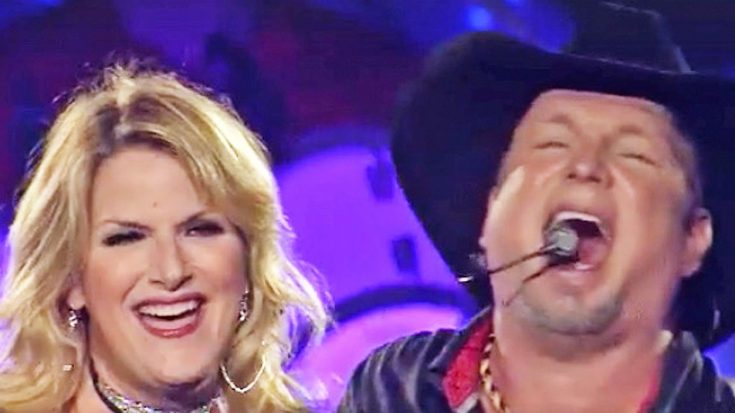 Garth Brooks‘ year just keeps getting better with each passing day. His tour has shattered ticket sales records in multiple cities across the U.S., he released a new album, and he also released a Christmas duet album with his wife, Trisha Yearwood.

Two of the greatest moments of Brooks’ career have happened just within the past few months. In September, he learned that he had a seventh album earn diamond certification from the RIAA, meaning that album had sold ten million total units.

What’s all the more remarkable about Brooks’ seventh diamond album is the fact that he is the only artist in history to achieve such a thing. He was previously tied with The Beatles, who have earned a total of six diamond albums.

To add the icing on the cake, Brooks was recently named as the Entertainer of the Year during the 50th CMA Awards. This was yet another major accomplishment for Brooks, as it marked his fifth time winning the coveted award.

Proving exactly why he earned his Entertainer of the Year title, Brooks is back on the road dazing and amazing country fans everywhere he travels. On Friday night (November 11), he was busy entertaining a crowd in Richmond, Virginia when Yearwood interrupted him mid-concert with a big surprise.

This isn’t the first time Yearwood has stopped her husband mid-performance with something important to say. She did the same thing when she learned about his seventh diamond album. But this time around, Yearwood didn’t have a new announcement to make, she simply wanted to brag up her husband and all of his previous accomplishments.

Humble as ever, Brooks was quick to acknowledge his band and crew as Yearwood spoke about him. As Yearwood introduced Brooks as the 50th CMAs’ Entertainer of the Year, confetti started to fly all over the stage and throughout the crowd.

But the real surprise came from above. Suddenly, what appeared to be thousands of balloons fell from the ceiling as the crowd howled with delight. Yearwood said that the 7,777 balloons were free for the crowd to take home, as they celebrated Brooks’ seventh diamond album and his Entertainer of the Year win.

We’re sure Brooks was blown away by Yearwood’s surprise for him! Now you can see it yourself in the clip below.

Congratulations to Brooks on everything he’s accomplished this year!

The best way to celebrate you and your CMA Entertainer of the year award Garth Brooks is with your band, your crew, and most importantly, your fans! Congratulations! We all love you!