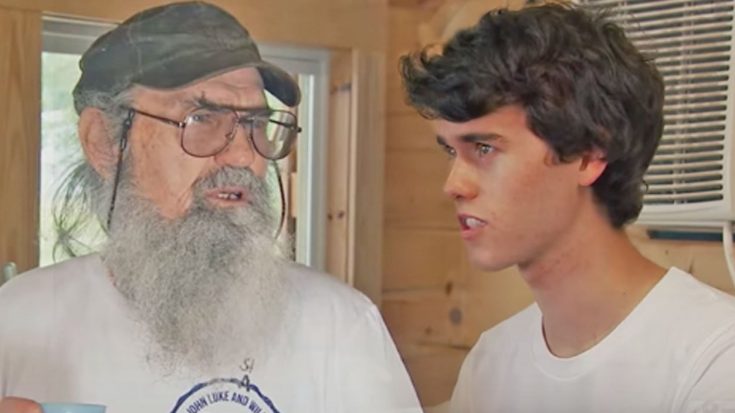 What is Uncle Si up to now?!

In Season 9 of Duck Dynasty, Willie Robertson went into business with his son, John Luke, as they opened a snow cone cabin called John Luke and Willie’s Ice Cabin.

They specialize in snow cones, which they call “snowballs” and the cabin is located at the Duck Commander Warehouse. Trying to keep a business alive is a lot of work, and since they sell snow cones, it is extremely popular during the warm seasons, but when it gets cold, no one really wants snow cones!

In a promo for the 11th season of Duck Dynasty, John Luke brings this up to his father.

“So as you can see, in the winter, we are not selling very many snow cones,” he says. “But to compensate, we try soup! Hot, tasty soup.”

Si seems to take this soup idea a little too far and turns into a disaster! In this brand new sneak peek, Uncle Si completely takes over the Ice Cabin, and not in a good way!

Even though it is still the summer, Si wants to get a jump start on their soup idea and makes sweet, cold, soup, which makes Sadie cringe just by one taste! He concocts soups that he calls “Pina Colada Clam Chowder”, “Blueberry Bisque”, “Cherry Noodle Soup”, “Cream of Colada” “Key Lime Chowder”, “Bubblegum Bisque”, and many more!

Watch the hysterical video below and make sure to tune in for the Season 11 premiere on Nov. 16 at 9/8c!