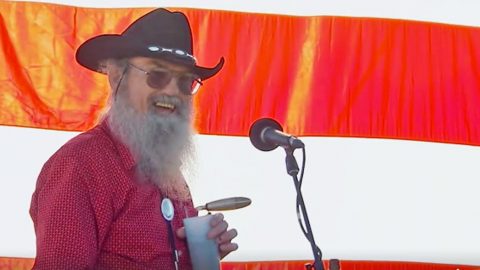 The moment is almost upon us. We have been dreading every single day we get closer to the very last episode of Duck Dynasty, which will air on Wednesday, March 29.

The one-hour episode will focus around a huge event – Uncle Si’s official retirement from working at Duck Commander. As most fans know, he makes all the reeds that go in each duck call, but at 68 years old, Si is finally ready for retirement.

As his parting gift, he has requested, “a slamboree, a wing ding, a shindig, but not just any party, a blowout!”

His family abided, and threw him a huge party in the parking lot of the Duck Commander warehouse. They even had a huge surprise in store for him!

While he was on a huge stage addressing his biggest fans, his family, a red tour bus drove up, and out walked a couple of cowboy looking folks.

“Look who we got here!” Si can be heard saying over the microphone.

They don’t reveal their faces in the preview, but we have a feeling it could be Dusty Hill, Billy Gibbons, and Frank Beard, the three men who make up rock band ZZ Top, because you can see a little bit of their beards. This would be a huge gesture in the series coming full circle since in the early seasons of Duck Dynasty, ZZ Top’s hit song “Sharp Dressed Man” served as the show’s theme song.

The whole Robertson clan can be seen wearing bright green t-shirts with his face and the saying, “Hay! I’m retired,” on them.

Watch the preview for the series finale below.

No one can throw a shindig quite like the Robertson family.