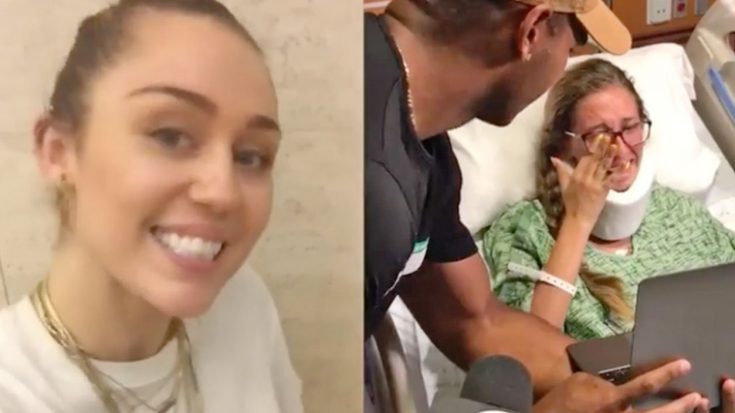 As shots rang out at  Las Vegas’ Route 91 Harvest music festival, Katrina Hannah was shot twice. After being shot once in her neck and and once in her shoulder, Hannah’s close friend, Matt Cuddihy, put his EMT skills to work to make her a tourniquet as a temporary fix.

Later on, a Marine and complete stranger to Hannah by the name of Austin Cox picked her up and took her to the hospital, never leaving her side to ensure she was amongst the first gunshot victims to undergo surgery.

Previously unprepared to speak publicly about the incident, Hannah is beginning to open up on the night her life changed forever. In an interview with ABC 7, Hannah opens up on her difficult road to recovery.

“I still don’t feel like any of this is real,” said Hannah, recently transferred to Casa Colina Hospital Center close to her hometown of La Verne, California.

Following the shooting, the heroic acts displayed by both Cox and Cuddihy went viral, Hannah’s story even reaching the eyes of her favorite singer, Miley Cyrus.

“Hi Katrina, this is Miley,” the popstar said in a video made especially for her. “I have heard about you from so many people. Your name got to me through so many people, so many friends, contestants on ‘The Voice.’ And they said you were a huge fan and I just want you to know I’m thinking about you all the time, sending good, healing, peaceful vibes to you.”

After being handed the laptop displaying Cyrus’ video, Hannah quickly becomes overwhelmed with emotion, wiping away tears as she watches the video her idol made especially for her.

If you would like to contribute to Hannah’s recovery you can do so here.