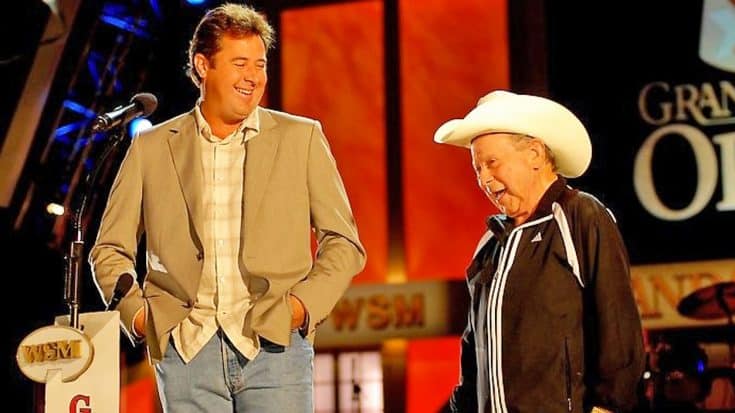 Little Jimmy Dickens will always remain a legend in the country music community. Standing at 4’11, he was a little man with a huge presence. His energy on and off stage was infectious, and was the oldest living Opry member before his passing in January 2015. Vince Gill was a longtime fan and friend of Dickens, which is why he wanted to share a sweet tribute to him during a special Grand Ole Opry performance.

Gill and Dickens were longtime friends that shared the stage multiple times. After Dickens passed, Gill recalled an encounter that may have been one of their best moments together.

“He might have been the best ever that ever graced this stage. He was everybody’s favorite,” Gill said. “We should all aspire to be so kind as Jimmy Dickens.”

Gill explained during a summer concert that he had just acquired a Fender guitar. The guitar had belonged to Dickens’ first guitar player, Jabbo Arrington who had passed away earlier that year. Arrington’s family reached out to Gill to see if he was interested in purchasing the instrument, to which he jumped on the opportunity.

“And they said, ‘Our dream is to have this guitar played on the Opry one more time.’ And so I said, ‘I can make that happen tonight,’” Gill concludes. “I went to Little Jimmy Dickens, who was getting ready to go on. I said, ‘Do you mind if I come out and play with you tonight?’ He said, ‘How come?’ and I said, ‘Well this guitar that I’m buying was Jabbo’s.’ He said, ‘My Jabbo?’ So the last time I got to play with Little Jimmy Dickens, I was playing on Jabbo’s guitar with him.”

During Dickens’ funeral, Gill played tributes to his friend with that very same Fender guitar. It now serves as a reminder to their beautiful friendship, and the mark that Dickens left on country music forever.

Watch Gill perform “Go Rest High On That Mountain” and “May The Bird of Paradise (Fly Up Your Nose)” in a Grand Ole Opry tribute performance Little Jimmy Dickens below.