‘Voice’ Finalist Opens Up About His Terrifying Brush With Death 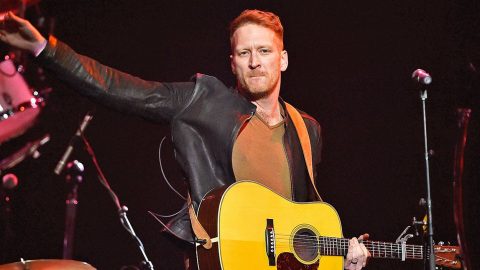 From the moment he stepped on stage for his blind audition, the coaches of The Voice knew that Barrett Baber was someone special. The then 35-year-old father of two earned a four-chair turn with his rendition of The Jeff Healey Band’s “Angel Eyes.” Being a country singer, Baber knew he had to go with Blake Shelton as his coach.

Week after week, Baber left America in awe with his emotional performances of country hits such as Zac Brown Band’s “Colder Weather” and Lee Brice‘s “I Drive Your Truck.” The self-branded “country soul” singer quickly became a fan-favorite, and generated enough votes to make it all the way to the finals. He ended up placing third behind his fellow Team Blake member Emily Ann Roberts and Team Adam‘s Jordan Smith.

Now, Baber is living his dream come true as a country singer. He released a new album titled A Room Full of Fighters on November 4, 2016, which topped the iTunes chart shortly after its release.

But those who remember Baber’s introductory story from The Voice will recall how close he came to never achieving such dreams.

It was June 1, 1999, and Baber was a young college student with a passion for music in his heart. He had just traveled to Germany with his college choir, and was on a flight back home to Little Rock, Arkansas. That’s when his life changed forever.

Baber’s flight took off the in midst of a terrible thunderstorm, and dozens of lightning strikes surrounded the plane as it soared through the sky. He instantly knew that something was wrong.

“In my head, I’m like, ‘Oh boy, this is gonna be a rough landing,’” he told The Tennessean during a recent interview.

Baber glanced over at the flight attendant closest to him, and could tell that she was trying her best to remain calm. As the seconds ticked by, Baber’s fear increased:

“I prayed. I started making deals. ‘I know this has been kind of a crazy year. Get me off this airplane and things will change. Well, maybe.'”

Baber was right to be scared, because once the plane landed it started hydroplaning down the runway. It eventually traveled down an embankment, crashed into a pole, and wrapped around another pole, causing the front of the plane to burst into flames.

After finding a hole in the plane, Baber threw one of his fellow passengers out and let a few others through before he made his own escape. Once he was safely out of the plane, the gravity of the whole situation hit him.

“I remember thinking to myself, I just want to go home. I was so tired,” he said.

11 people died that day, including James Harrison, a baritone singer in Baber’s choir. Despite everything they had been through, the choir met again when school started up in the fall.

“Sometimes we just looked at each other and cried,” Baber said. “And sometimes we’d sing.”

Baber has never stopped singing since, and now he is well on his way to becoming a country music star. You can witness his outstanding talent by tuning in to his blind audition for The Voice below.