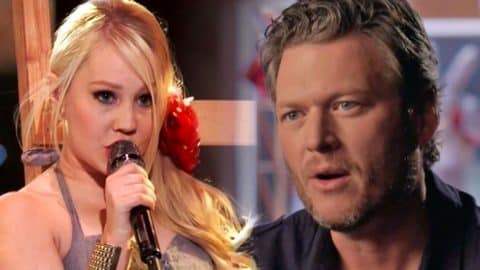 The singer confessed that if she was on this season, she would NOT pick Blake because she’s apparently more interested in another coach…

While on her season of NBC’s hit singing competition, The Voice, Raelynn made it all the way to the quarterfinals alongside the country coach, Blake Shelton. Even following her departure from the show, he mentored her and she later acquired a recording contract and even scored a Top 10 hit!

But why is she now saying that if she were choosing again…it definitely would not be Blake?

Opening up to US995’s Morning Show, Raelynn reveals that in retrospect, her decision was a huge highlight of her life, saying that choosing Blake was “one of the best decisions [she’s] ever made”.

However, she adds that if she were faced with the decision again…she’d be strongly leaning toward Miley Cyrus!

The new season hasn’t officially aired yet (it’s set for a September 19th debut) so Raelynn may be jumping the gun a bit, but it seems her convictions are quite strong!

“[Blake’s] just amazing. He’s like family to me, and I can’t imagine picking anybody else. I will say, though, if I would’ve been on a season with Miley Cyrus on it…I might have picked Miley!”

What do you think of her choice to pick Miley over Blake? Do you think Miley has a strong chance at winning this season?

Watch one of Raelynn’s performances from The Voice below.