By Manly Bryant on January 24, 2018
Advertisement 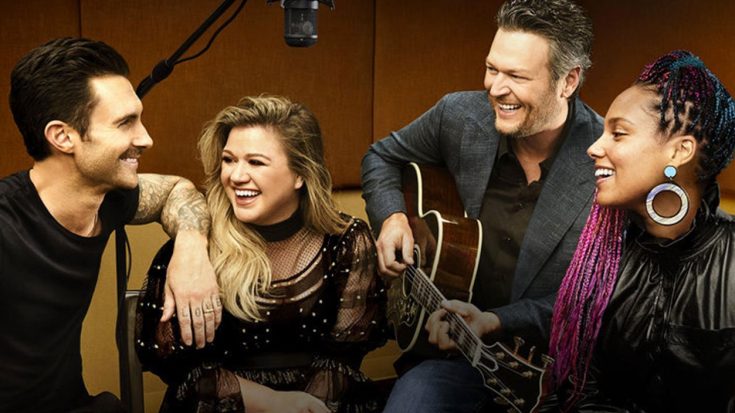 Just announced today, these coaches have selected their famous celebrity advisors – and their choices might surprise you!

Season 14 of NBC’s hit singing competition, The Voice, will kick off with blind auditions airing on Monday, February 26th, 2018. Following the auditions, each team and their coach will work with a special advisor on their performance. For this, the coaches usually pick an accomplished singer to help the contestants grow their skills.

For the upcoming season, the coaches are Blake Shelton, Adam Levine, Alicia Keys, and the newest to take a seat in the big red chair – Kelly Clarkson! All but Clarkson have won at least one season and have spent plenty of hours in the chairs, so it will be very interesting to see how they all work together! Either way, we are certain it will be a ton of fun.

So far, all but Levine have announced their choices in a celebrity advisor and one of them is just 19 years old!

Shelton has named fellow country mega-star Trace Adkins as his choice of advisors and Adkins will follow a slew of other country acts to help hone Shelton’s team.

Following not too far behind, Alicia Keys revealed her advisor would be none other than Canadian teen singing sensation, Shawn Mendes! The 19-year-old pop star has already launched two full-length albums and has a bevy of hits under his belt.

Not wanting to be left behind, the news that Clarkson had named her advisor as Pitch Perfect movie star and hitmaker, Hailee Steinfeld. Together the two shared memories of Clarkson’s unforgettable season on American Idol.

We are still waiting for word from Adam Levine on who he’s signed on to help him try and win.

Check out Clarkson and Steinfeld’s adorable interview with Access below.