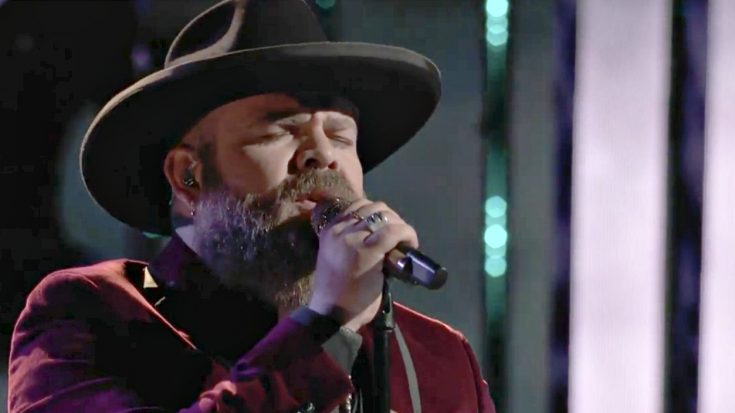 It’s been a roller coaster of a ‘Voice’ ride for Adam Cunningham. After sailing through the pre-taped Blind auditions, Knockout and Battle Rounds, Cunningham struggled when the live shows started and found himself in the bottom 2 two weeks in a row. But, now the country singer seems to have found his footing and is fighting for a spot in next week’s finals.

During Monday night’s ‘Voice’ episode, Cunningham took on one of country music’s most emotional ballads – Lonestar‘s 2001 hit “I’m Already There.” The flawless performance proved that Adam has no intention of backing down now.

Donning his trademark hat and a maroon jacket, Adam lent his soulful voice to the tear-jerking lyrics.

“You have been such an amazing surprise,” his coach Adam Levine added. “You just continue to have your back against the wall. And every single week not only do you make it through, but you continue to compel people to the point where, look at you now man. I mean, you were standing in the bottom two, and here you are, in my opinion, one of the top contenders in the competition.”

During Tuesday night’s episode (December 12), the Top 8 will become the Top 4 as half of the remaining hopefuls are sent home. Tune in to find out if Adam Cunningham will survive another week.

Check out Adam’s performance of “I’m Already There” in the video below.