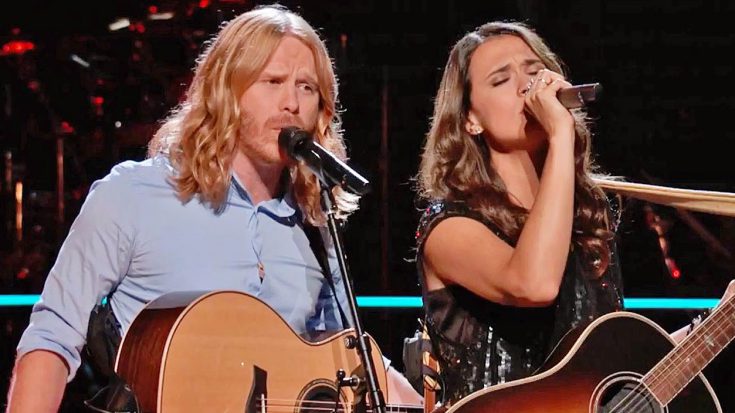 The battle rounds have always been a fan-favorite part of The Voice. During the battles, two team members compete against each other by singing a duet. The entire time, each contestant is aiming to prove to their coach that they are the best singer to keep.

At the end of the battle, the coach faces a tough choice to make, as they have to choose the contestant that remains on their team. The other contestant is sent home, unless they are luck and get stolen by one of the other coaches.

That’s exactly what happened following one intense battle on The Voice that aired on Monday night (October 16). The battle took place between Adam Pearce and Whitney Fenimore of Team Adam, and they sang the Stevie Nicks & Tom Petty duet “Stop Draggin’ My Heart Around.”

“Stop Draggin’ My Heart Around” was released in 1981 as the lead single off of Nicks’ debut solo album Bella Donna. Petty co-wrote the song with his Heartbreakers bandmate Mike Campbell, and sang with Nicks on the chorus and bridge. The song was a smash success, and reached the second spot on the Mainstream Rock chart.

Pearce and Fenimore delivered a particularly impressive version of the song, with each of them earning their individual moments to shine. Both hit some high notes that left the coaches impressed with what they heard, and they also demonstrated an improved sense of stage presence.

Once the battle ended, the other coaches told Levine who they thought he should pick. Blake Shelton‘s vote went to Fenimore, while Miley Cyrus and Jennifer Hudson chose Pearce.

After that, Levine took the time to praise both of the contestants:

“This is really tough because, where I might have been leaning in Adam’s direction initially, Whitney you’ve really, really surprised me. The high note at the end, that’s no joke. You’re refreshingly different, you really are. And I’m a huge fan of yours. Unfortunately, I’ve fallen in love with both of you.”

Levine struggled to make a decision, but eventually decided that he wanted to keep Pearce on his team. For him, the choice came down to the fact that he “couldn’t imagine moving on without him.”

But Fenimore’s time on the show hasn’t ended yet! Both Cyrus and Shelton declared that they wanted to steal her for their own teams. After that, it was Fenimore who was left with a tough choice to make!

Tune in below to see who Fenimore ended up choosing as her new coach!