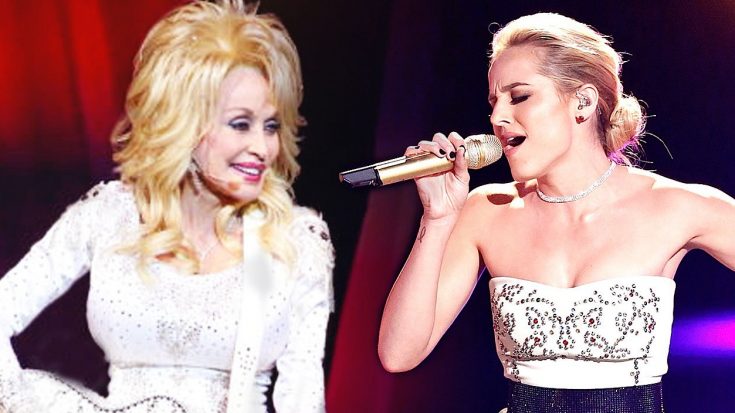 If you ask a group of people to name a Dolly Parton song, you can bet that a large number of them will answer “Jolene.” Dolly’s song about an auburn-haired beauty is not only one of her most popular works, but it is one of the most historic pieces in all of country music.

Originally released in 1973, “Jolene” continues to remain a country fan-favorite. All you have to do is look at successful cover versions and collaborations, such as Pentatonix‘s now Grammy-nominated version with Dolly.

In a 2008 interview with NPR, Dolly said that “Jolene” has been covered by more artists than any of her other songs. That total amounts to over 30 different artists, who have performed it in a variety of languages.

One of those many versions is actually duet between Dolly and a standout star from Season 10 of The Voice…Mary Sarah.

Long before she was on The Voice, Mary Sarah was already making a name for herself in the country music community. In 2014, when she was only 19 years old, Mary Sarah released her debut album “Bridges.” The album featured duets between Mary Sarah and country legends such as Vince Gill and Merle Haggard. Mary Sarah’s “Jolene” duet with Dolly was also included on the album, and let us tell you, it’s a real gem.

Instead of taking the lead herself, Dolly provides backup and harmony to Mary Sarah’s lead vocals. There are many times when Mary Sarah is left all on her own, and she proves her voice has the power to stand alone.

We also enjoy the fact that Mary Sarah stayed relatively true to the song’s classic roots, rather than change it up too much, Still, she managed to take it and make it completely her own.

Go ahead and tune in below to catch Mary Sarah’s sensational “Jolene” duet with the one and only Dolly Parton. This girl is going places, that’s for sure!