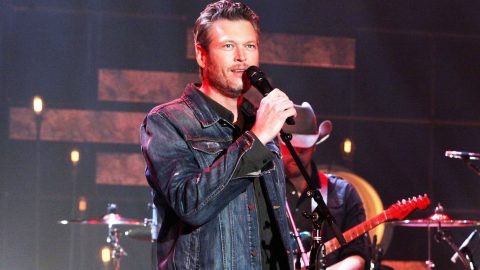 After spending time with him as a coach this 22-year-old reveals what it’s really like working with him when the cameras aren’t around.

Singing ever since she was 17 – and coming from an entire family of musically-inclined people, RaeLynn rose to fame through competing on a 2012 season of NBC’s hit singing competition, The Voice.

Reigning from Texas, this blonde country gal chose Blake Shelton as her coach and they quickly became fast friends, but now that she’s outside the competition and has been signed on as the opener for the country mega-star, what does she think of working with him?

“I’ve been an artist since I was 17 years old,” she tells People. “And there have been some bumps in the road. I would get upset things weren’t going a certain way…but Blake was always there to help me really get through it, and telling me, ‘Rae, this is what you’re supposed to do.’”

But beyond his constant support and encouragement, RaeLynn says that Shelton has taught her a very strong lesson about being patient.

“…patience is definitely a virtue. It took him 10 years to accomplish where he’s at now. When I look at Blake’s career, I see a career that’s going to last a while — he’s not just a one hit wonder — and that’s what I want to be,” she reveals. “I’ve learned persistence from him — working at it every day and getting to know people. Blake is just such a kind person, and when you treat everybody with respect, people are going to treat you with respect. I love watching him on stage because he’s so good with the crowd.”

And she’s absolutely right – one day at a time! Recently, the day came for RaeLynn to launch her debut album, and she says that the experience has been incredible!

Watch her video of life behind scenes on the tour below!