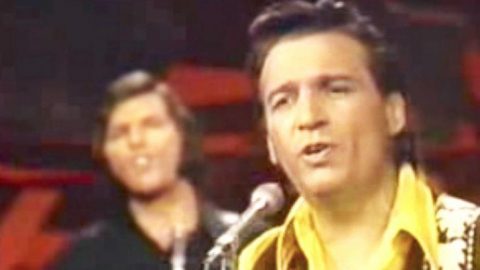 Most people know “Me and Bobby McGee” as a rock song. That’s understandable, since the most recognizable version was recorded by rock artist Janis Joplin.

But country fans know that the song’s roots reside elsewhere. You see, Joplin wasn’t the first artist to record “Me and Bobby McGee,” and she wasn’t the last either.

Written by country legend Kris Kristofferson and songwriter Fred Foster, “Me and Bobby McGee” was originally recorded by country artist Roger Miller. That version of the song was released in July 1969, and several other recordings followed before Joplin’s was released. Some of the artists who released recordings of the song during that time were Kenny Rogers, The Statler Brothers, and Gordon Lightfoot.

The new renditions didn’t stop coming after Joplin’s version hit the airwaves. Nearly 40 artists have recorded and released “Me and Bobby McGee” since Joplin’s recording debuted in 1971. A large number of those artists are country singers, including Johnny Cash, Dolly Parton, and Loretta Lynn.

Another country artist who tried his hand at “Me and Bobby McGee” was Waylon Jennings. He released his version of the song in March 1973, which appeared as the tenth track on his critically-acclaimed album Lonesome, On’ry and Mean.

Although he didn’t release “Me and Bobby McGee” until 1973, the song had been in Jennings’ repertoire for a few years before that. Old footage shows a young, clean-shaven Jennings singing the song on the set of a television show. His voice was rich and strong, so much in fact that we’d go so far as to call it one of the best performances of his career.

Jennings’ guitar playing and the expert musicianship displayed by his band members made their performance of “Me and Bobby McGee” something worth remembering. The entire end of the song is a pure country jam session…music to anyone’s ears!

Scroll down below to catch the clip of Jennings putting his spin on “Me and Bobby McGee.” We’re sure you’ve heard the song many times before, but you’ve never heard it the way that Jennings did it!