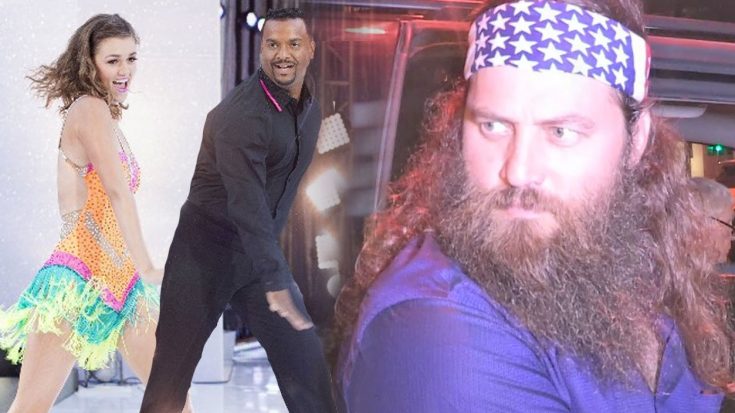 In 2014, Duck Dynasty star Sadie Robertson was tearing up the dance floor on the hit ABC show Dancing With The Stars.

Every week, her family was in the audience cheering her on and as a teenager, she really needed their support. Having never danced before, Sadie blew everyone away with her ability to pick up the routines and her positive energy.

She made it all the way to the finals and performed one of the most talked about Freestyle dances in the history of the show. America had to vote between her and Fresh Prince of Bel Air star Alfonso Ribeiro, and she ended up placing second.

While she was happy to make it past week one, there was one family member who still hasn’t recovered her second place finish. Her dad, Willie Robertson recently made an appearance at a celebrity golf tournament in Lake Tahoe, where Ribeiro was also playing.

Golf Digest set up a competition called Celebrity Smash 2016, where the celebrities had to try a smash a glass target in the least amount of swings.

Ribeiro’s goal was to just smash the target! He thought he’d have to use 5-10 swings, but he lined his shot up perfectly and only needed one.

Robertson stepped up to the tee and said, “This is the guy I’m always trying to beat, Alfonso Ribeiro. He beat my daughter Sadie on Dancing with the Stars, so I’m always going after him.”

In true Robertson fashion, Willie hit the leg of the target, and the ball ricocheted right into the lens of another camera! Since it did break the glass target, Willie’s stroke count was six.

Maybe next time he will be able to defend his daughter’s honor! Watch the video below.