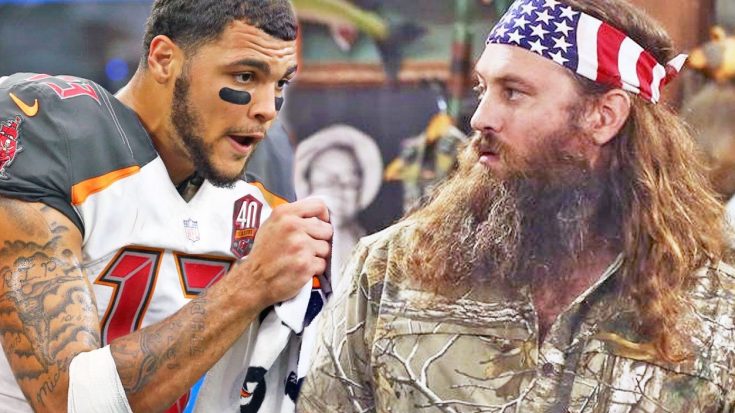 This NFL season has been full of controversy. It began with Colin Kaepernick’s protest of the National Anthem.

“I am not going to stand up to show pride in a flag for a country that oppresses black people and people of color,” Kaepernick told NFL Media in an interview directly following his initial stance against the National Anthem. “To me, this is bigger than football and it would be selfish on my part to look the other way. There are bodies in the street and people getting paid leave and getting away with murder.”

Kaepernick was joined in protest by many more NFL players, some who have been ridiculed by teammates and their family. Denver Broncos linebacker Brandon Marshall lost multiple endorsements with Academy Federal Credit Union and CenturyLink, which caused him to end his protest.

Celebrities have been speaking out against these protests including Kid Rock and Aaron Lewis who are not happy with how the NFL players are handling this.

Another person who is speaking out against these protests is Duck Dynasty star Willie Robertson. He is particularly frustrated with Tampa Bay Buccaneers wide receiver Mike Evans, who told reporters that his National Anthem protest has nothing to do with social injustice or racial issues.

Evans is protesting because of the outcome of the presidential election, telling WFLA’s Paul Ryan, “When Ashton Kutcher comes out and says we’ve been punked, then I’ll stand again.” He continued to say, “I’m not big on politics and things like that… But I told myself if this happens, then America is not right right now. I said this a long time ago. When [Trump] ran, I thought it was a joke, and the joke continues.”

He made it clear that he is thankful for the military and that his protest is not about them.

“I don’t want to disrespect the veterans or anything. The men and women that served this country, I’m forever indebted to them.”

Robertson was on Fox Business’ Varney & Co. and was asked about Evans’ protests, since he has been a Trump supporter since day one.

“He’s actually going against what he just said. He doesn’t want to disrespect, but he’s disrespecting by what he’s doing. Aren’t there other outlets besides the one thing right there. Aren’t there other outlets? You’ve got all this social media. He’s a professional athlete. He could use that in any other way, yet [he] chooses this time, so I don’t understand it. Initially it was over [social injustice and racial issues], now we’re gonna sit down over who becomes President. This is not healthy.”

ESPN reports that Evans has since ended his protest and issued an apology to all those offended, especially the military.

Do you agree with Robertson? Sound off in the comments below after you watch the full clip below.