You Won’t Believe What Luke Bryan’s Wife Surprised Him With For His Birthday! 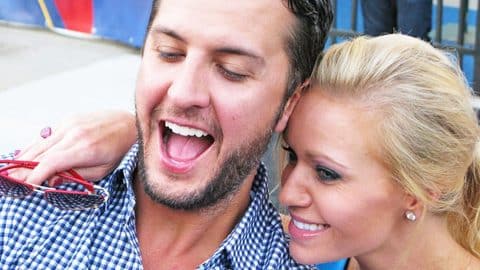 Luke Bryan rang in his 40th birthday with style during a concert on Sunday (July 17). Even though the “Huntin’, Fishin’ and Lovin’ Every Day” singer had to work on his birthday, his wife, Caroline, still made sure it was special.

Thanks to Caroline, Luke’s 40th birthday was one he’s sure to never forget. Luke performed in Bangor, Maine that evening, and the local news reports that Caroline surprised him on stage with a one-of-a-kind gift.

Luke and his fans got the chance to see his birthday surprise when his tour mates Little Big Town and Dustin Lynch brought it out on stage. So what was it? We bet you’ll never guess…

Working with Cake Concoctions bakery, Caroline had a special cake designed that shows Luke’s face attached to the body of a “Chippendales” dancer which popped out of the top of the cake. Photos show that flames climbed up Chippendale Luke’s body, while multiple sparklers sizzled on the sides of the cake. Needless to say, Luke was quite surprised by Caroline’s gift to him, and decided to leave it on stage for everyone to get a good look at. Ever the jokester, Dustin asked the audience “Who wants to taste the cake?“

Luke pleaded to keep the moment off of social media, but it was just too priceless not to share! A fan uploaded a video of Luke when he received his birthday surprise, as everyone walked out on stage and sings “Happy Birthday” to him.

The beginning of the video below shows the moment that Luke saw his cake for the first time. If you want to watch more hilarious antics ensue, tune in to the rest of the video, during which Luke puts his spin on the popular song, “The Time of My Life.”

It looks like Luke had a birthday to remember!