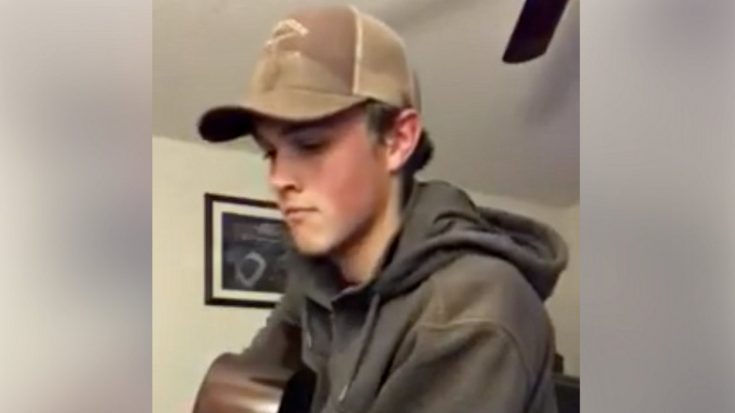 Zach Top. If you’ve never heard his name before, you’re in for a treat! This talented 20-year old from Colorado has been singing for more than a decade, but many country music fans are just hearing about Top after he posted a stunning tribute to the late Daryle Singletary.

Numerous established artists have released tributes to the “Too Much Fun” singer, who died February 12. But, it was Zach Top’s flawless vocals on “Spilled Whiskey,” a single from Singletary’s 2015 album There’s Still A Little Country Left, that left us speechless.

“I was really sad to hear of mister Daryle Singletary’s passing today. He was one of my favorite singers ever, and one of the last true country artists in the business,” Zac captioned the video. “This is one of my favorite tunes of his and I think it has a bit of a double meaning now. It was a shame he had to be taken so soon, but it’s all in God’s hands. Rest In Peace, Daryle”

﻿In a statement to Country Rebel, Zach Top shared his affinity for classic country saying that George Strait has been his hero since he was 3-years old. “But, I’ve also drawn a lot on some of the real oldies like Haggard and Jones,” Top added.

The influence of these country greats is evident in Zach’s voice and give his voice an “old soul” feel that can only be credited as a God-given talent. Not only is Zach an incredible vocalist, but he’s an accomplished bluegrass musician. In 2016, Zach and his band North Country Bluegrass won the coveted SPBGMA band competition title with Zac singing vocals and playing guitar and mandolin.

Hear Zac Top’s beautiful tribute to Daryle Singletary in the video below. To hear more from Zac, follow him on Facebook by clicking here.