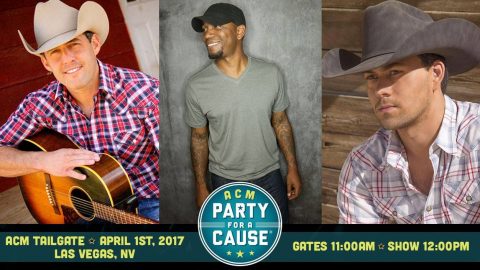 The ACM’s are fast approaching and, fortunately, so is your opportunity to party with your favorite country music stars! Taking over “Sin City”, this country music extravaganza is expected to revamp Las Vegas and officially declare cowboy boots on the ground!

The ACM Party for a Cause: Tailgate Party presented by Country Rebel will be hosted by Stoney’s Rockin’ Country, transforming their parking lot into a countrified bit of Heaven! The restructured venue showcasing killer performances will feature multiple stages for optimal enjoyment and an abundance of food that is sure to fill your hunger cravings before kickin’ the dust up on the dance floor!

As if these amenities aren’t enough to have you scrambling for your boots, the set list for the evening is sure to have you lassoing your bags and riding straight for the bright lights!

Tickets start at just $25, although this riveting event is sure to sell out quick! Grab ’em while they’re hot! Be there or be wishing you were!

Get your tickets HERE!