BREAKING NEWS: Truck Flips Over On Interstate Killing 100 Pigs – Here’s What We Know 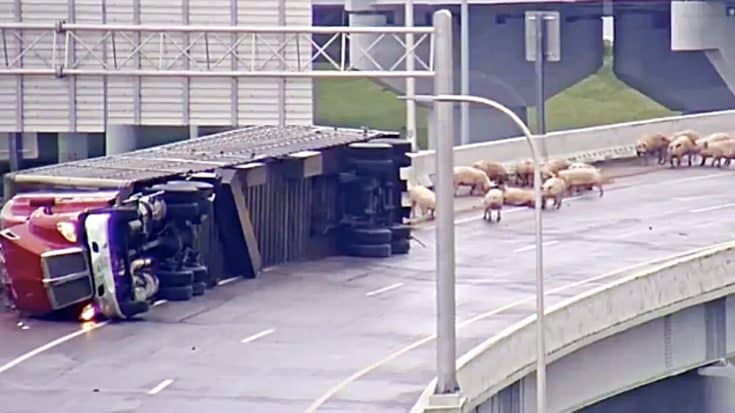 Dozens Of Pigs On The Highway

Louisville Kentucky’s Interstate 65 is all over major news right now due to a massive truck that flipped over on Wednesday spilling dozens of pigs all over the highway.

#TrafficAlert: #Crash on I-65 South Ramp to I-64/71 in Jefferson County (#Louisville). The ramp is blocked.#Knowbeforeyougo pic.twitter.com/vq89Y40t2J

What Was The Cause Of The Crash

The incident reportedly happened at 7:15am and a helicopter flying over the scene said they saw the pigs laying dead on the road. Unfortunately, out of the 178 pigs, 110 of them died due to the crash and it blocked the ramp until 3:00pm.

The authorities think maybe he was going too fast and because the road was wet and the load was heavy it flipped over. However, the police are still trying to figure out the cause of the crash and nothing has been confirmed yet.

#TRAFFIC all lanes are blocked 65S to 71N/64, pigs are on the interstate after a semi overturned. pic.twitter.com/9PRhhTE13e

In 2017 A Truck Full Of Pigs Did The Same Thing

This is actually not the first time a truck filled with pigs has flipped over in this exact same spot. Courier Journal reported that two years ago in 2017 a semi-truck full of pigs did the same thing. The Farm Sanctuary quickly used this incident to push vegetarianism.

“We were saddened to hear about the reportedly 100 pigs who were killed in the tractor-trailer crash this morning in downtown Louisville on the I-65 South ramp,” Gene Baur, president of Farm Sanctuary said. “Pigs and other farm animals endure intolerable cruelty every day in factory farms, slaughterhouses and in transit, and their abuse is largely hidden from public view.”

The truck was said to be headed to the JBS Swift slaughterhouse in Butchertown. After the crash, the driver was taken to the University of Louisville Hospital to be treated. Fortunately, he didn’t suffer any serious injuries.

LIVESTOCK UPDATE: LMPD officers are now barricading the pigs onto the shoulder. You cannot get onto the ramp from the Kennedy Bridge. 65S to 71/64 will have delays this morning.