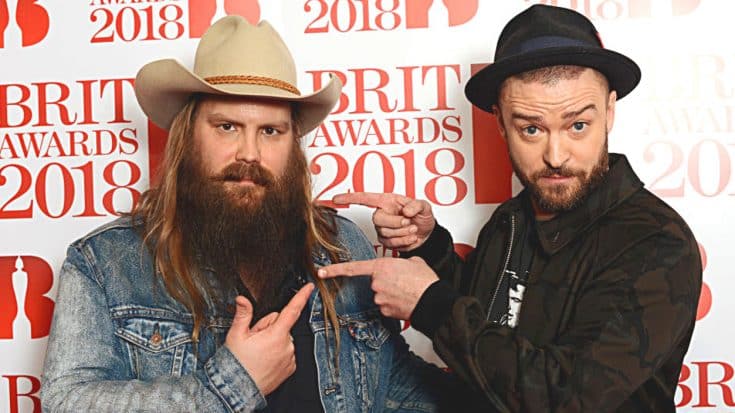 A country singer-songwriter and a former boy band member turned pop star sound like the least likely of collaborators. But in Chris Stapleton and Justin Timberlake‘s case, such a mix results in the perfect recipe.

Back in 2015, the duo performed together at the CMA Awards, singing Timberlake’s “Drink You Away” and Stapleton’s rendition of “Tennessee Whiskey.” That one performance was such a hit, that many credit it as being the catapult for Stapleton’s success as a solo artist.

But Stapleton and Timberlake’s CMA Awards performance wasn’t just a one-time collaboration. The two turn out to be friends, and find many chances to work together.

What’s In The Future?

Following the immense success of their CMA Awards performance, Stapleton and Timberlake knew they had a good thing going on. Eventually, the two got together to write a new song, which turned into a little track y’all may know as “Say Something.”

Released as the third single off of Timberlake’s album Man of the Woods, “Say Something” was as big of a hit as you’d expect. It climbed as high as the ninth spot on the all-genre Billboard Hot 100, and the eighth spot on the Billboard Adult Top 40 chart.

So now that it’s crystal clear that Stapleton + Timberlake=formula for success, will the two ever considering recording together again? Furthermore, will they take the plunge and release a full album together?

You may think those questions will be left unanswered, but you’re wrong!

Stapleton recently took some time to chat with Billboard backstage before he performed at CMA Fest in Nashville on Saturday (June 9). During that conversation, Stapleton teased that fans haven’t seen the last of him and Timberlake as a duo:

“We were talking about something earlier today,” he said. While he wouldn’t reveal many details, he did explain why he thinks they work well together musically. “We just have fun. It looks like the odd couple to most people, but we have a lot of the same musical influences — old R&B and soul music and things like that. We just enjoy hanging out.”

Curious to know if they’d ever consider something more than just a single, Billboard asked if Stapleton and Timberlake would make an album together. Surprisingly, it doesn’t seem to be out of the question.

“There will probably always be music being made, whether it’s writing or talking about music or playing music for each other…” Stapleton said. “We’re both at a phase in our life where we want to have fun playing music. That’s why it makes sense.”

They may not have been a “yes,” it was a pretty solid “it’s possible.” We’ll take that answer, won’t y’all?

By now, we know that anything Stapleton and Timberlake do together will be pleasing to the ears!