By Manly Bryant on November 23, 2021
Advertisement 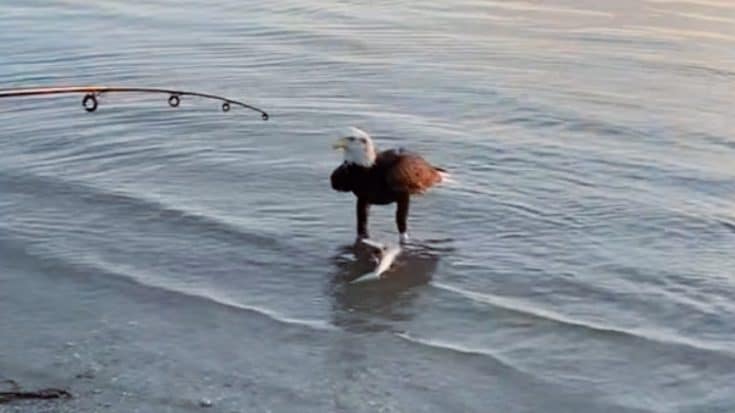 Amanda Rissman captured some incredible footage on video of an eagle snatching a freshly caught fish being reeled in on a fishing line towards the beach.

The Utah native was visiting her family in Pinellas County, Florida with her boyfriend Chad when they all decided to go fishing since Chad had just got his fishing license that morning.

The family drove out to Dunedin Causeway, a bridge located near a beautiful beach where they could fish and the guys threw their lines into the water.

They tested out their different fishing gear and got a few nibbles now and then but weren’t having very much luck. However, there was still a beautiful sunset and the weather was great so everyone was happy to be there enjoying time together.

After a while, they were all about to pack it up and stop fishing for the day but that’s when a fish bit down onto Chad’s bait and he started reeling it in.

As his catch got closer to them and was just a few feet from the shoreline, all of a sudden, a bald eagle came out of nowhere soaring down from the sky, and landed on top of his fish.

In amazement, they all watched as the majestic bird held onto the fish that was still hooked onto Chad’s line. At this point, they could tell what he caught wasn’t even a fish at all, but actually a small shark and the eagle had it in its talons and it wasn’t going to give it back.

The family watched in awe over the next 20 minutes as the eagle ate the shark right there on the beach in front of everybody. It even began to attract more onlookers from a nearby beach club who walked over to watch.

Amanda took another short video you can watch below of the eagle biting its meal. Check that out in the video below!

@amandarnhot Why is it spicy? When the Bald Eagle steels your Shark you let em have it. #florida #floridaman #floridalife #floridafishing #foxnews ♬ original sound – Mr. Earle