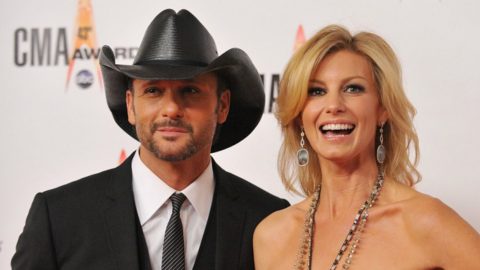 Faith Hill and her hubby of 21 years, Tim McGraw, are currently on the west coast for the latest leg of their Soul2Soul World Tour. The tour is the third joint tour for the couple who are two of country music’s most successful solo acts.

While the couple often share insight into their luxurious lives on social media, rarely do fans get a chance to see the two without the makeup and perfect hair that goes along with being a star. During a concert stop in Seattle over the weekend, Tim and Faith stepped out for a meal and were spotted by a fan who asked for a photo. The couple obliged, despite the fact that Tim was sporting a five o’clock shadow and Faith was sans makeup.

Regardless, the pair looked stunning and we can’t help but notice how Faith’s flawless complexion belies her 50 years.

Tim and Faith, who recently celebrated their 21st anniversary, have only a handful of dates left of the current leg of their Soul2Soul World Tour. They have yet to reveal what’s to come after their tour, but we know that Faith will have her hands full as producer of the television talk show Pickler & Ben which was renewed for another season.