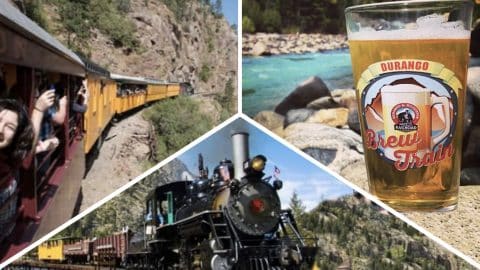 Folks from all over the country are traveling to Durango, Colorado to ride the historic Durango Train. Twice a year, beer enthusiasts hop on board an authentic 1920’s steam locomotive for a day of beer, live music, and great fun.

Appropriately called the “Brew Train,” guests onboard are treated to a full day of learning about beer and of course, lots of beer drinking. Several different breweries join the fun so guests can try a multitude of different types of beers. For the two 2018 dates, the breweries aboard the train were Four Peaks Brewing, Left Hand Brewing, Animas Brewing Company, Ska Brewing, Steamworks Brewing Company, and Brew Pub & Kitchen.

According to Durango Train’s website, both 2018 dates sold out very quickly and they recommend that interested guests join the waitlist for the 2019 dates, which are August 31 and September 28.

“Signing up is your best chance to get on board for the 2019 Brew Trains or secure your place on the list for 2020,” they wrote.

Guests plan entire trips around the Brew Train schedule, including this couple who went on the adventure for part of their honeymoon!

I think the Brew Train was our favorite thing we did on our honeymoon! Durango is an awesome place! . . . #throwback #honeymoon #colorado #durango #silverton #narrowgaugerailway #brewtrain

If beer isn’t your thing, and we won’t judge you that much for it, Durango Trains also holds a Wine & Rails event, which is the same thing for winos!

The Brew Train begins at the Durango Depot and travels to Cascade Canyon in the San Juan National Forest, where guests are given two hours to explore, taste more beer, and listen to live music.

Watch the promo video for the Brew Train in the video below.