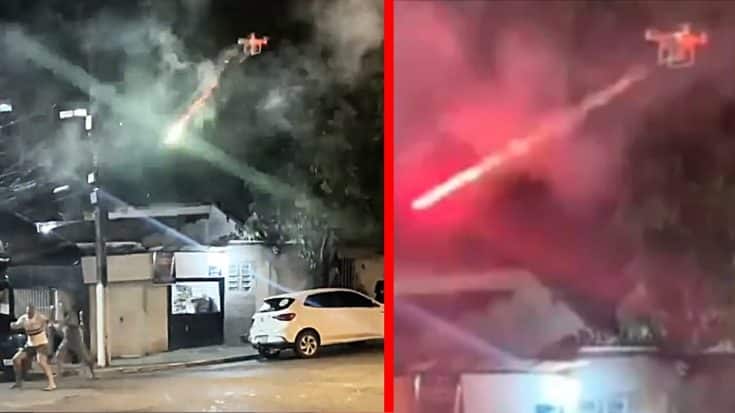 A recent video circulating the internet has gone viral showing a drone loaded up with fireworks and shooting into a crowd of people standing in the streets of Brazil having a party.

Neighbors Were Being Too Loud?

The video was captioned in Portuguese saying, “My friends had a barbecue on the street and didn’t invite me. Look what I did with them…” insinuating that he was jealous, so he sent his drone in to stop the party.

You can see the drone take off into the sky and fly over to the partiers blasting a firework called “the roman candle,” that shoots sparks and are for the most part harmless, but intimidating if it’s being aimed at you.

The Video Was A Hoax

Everybody scatters from the party circle as the fireworks start raining down on them and as they try to run away, the drone operator follows them continuing to make them run for cover.

However, after doing some research it was reported that this was not a mad neighbor but a local Instagram star in Brazil named, Lucas Albert, who was filming a funny video for this page. Brazilian media outlets reported it as “fake news” and Lucas posted to his Instagram later saying “they’re just jokes with my friends.”

Watch the full video of the drone shooting fireworks below.