“I Think We All Knew,” Blake Said In 2019 Interview About Adam’s Choice To Leave “The Voice”

By Miranda Raye on July 8, 2019
Advertisement 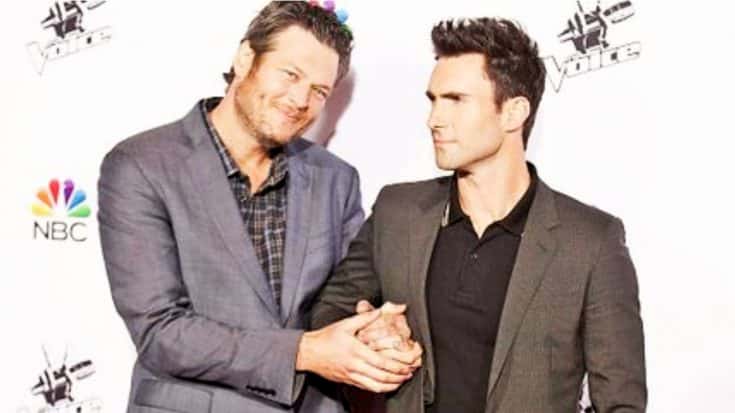 After serving as a coach on all previous seasons of The Voice, Adam Levine made the shocking announcement at the end of Season 16 in 2019 that he would not be returning for the 17th season in the fall of that year.

In a post to his social media pages, Levine explained his reason for leaving the show, simply saying, “For me, it was time to move on.”

Throughout that post, Levine also took the time to thank the people he worked with during his time on the show. He wrote a special message for his fellow coach and “frenemy” Blake Shelton, and it was one of the most emotional parts.

“And, BLAKE F—–’ SHELTON. I couldn’t hide my love for you if I tried. Seriously. I tried. Can’t do it. Our friendship is and always will be one for the books. Whatever this whole surreal experience was, Im(sic) just happy I got to experience it with you.”

As you would expect, Shelton was also shocked to learn that Levine had made the choice to leave The Voice. He reacted to the news on Twitter, revealing that he had only learned about Levine’s departure the previous day.

“Having a hard time wrapping my head around @adamlevine not being @NBCTheVoice anymore,” Shelton wrote. He later went on to add, “Gonna miss working with that idiot.”

Having a hard time wrapping my head around @adamlevine not being at @NBCTheVoice anymore. After 16 seasons that changed both of ours lives. I only found out about this yesterday and it hasn’t set in on me yet. Gonna miss working with that idiot.

While Shelton was stunned to learn that Levine was leaving the show, he wasn’t entirely blindsided. In a June 2019 interview with Entertainment Tonight, he shared some then-new information about Levine’s choice to quit The Voice, and made it clear he may have known about his decision before most people did.

During the interview, Shelton shared that he and other folks involved with The Voice could tell that something was off with Levine during Season 16.

“I think we all knew, on the inside of the show, that he was ready to make a move,” Shelton said.”For a guy like Adam…for him to have even done it as long as he did without wanting to move on to the next thing, is amazing. But I know he’s happy with his decision. Doesn’t mean I am, or any of us [are happy].“

But Shelton admits that the “blow” of Levine leaving the show was softened thanks to the person who filled his red chair. That person was none other than Gwen Stefani, who also happens to be in a relationship with Shelton.

Though there’s no doubt that Shelton will still miss bickering with Levine on the show. Their friendship produced many hilarious moments during their time on The Voice, and you can relive some of those moments below.

Shelton’s interview puts things in perspective and makes it clear that Levine must have been toying with his choice to leave The Voice for some time. While it doesn’t make it an easier to handle his departure, it at least makes his choice more understandable.

We sure will miss him!