By Miranda Raye on June 7, 2018
Advertisement 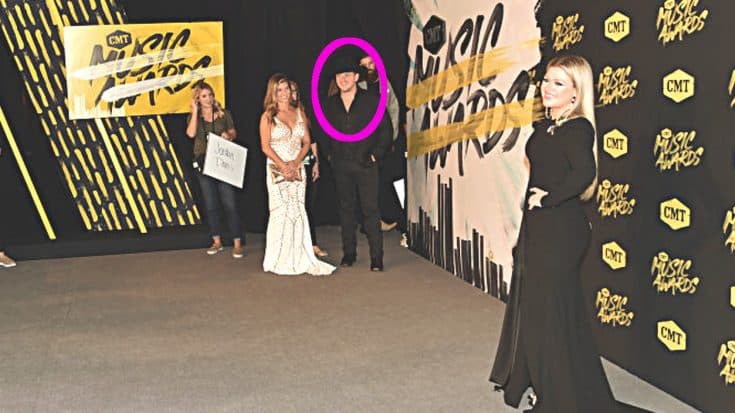 Kelly Clarkson has already walked her fair share of red carpets this year, and she’s rocked every one. Prior to the CMT Music Awards, the last red carpet she walked was at the Billboard Music Awards, which she served as the host of this year.

Her husband, Brandon Blackstock, was on hand to walk the red carpet with her, and the two looked as cute as could be. Here they are along with Brandon’s daughter and Kelly’s stepdaughter Savannah.

Brandon is usually always by Kelly’s side whenever an awards show rolls around. So it was a bit puzzling when he seemed to be missing from the CMT Music Awards on Wednesday night (June 6).

All the photos published of Kelly show her walking the red carpet solo, leaving many to believe that she had attended the awards alone. But shortly after the made her red carpet debut, Kelly took to Instagram to share that she actually had special guy there as her date, and it wasn’t Brandon.

It turns out that Kelly’s mystery man was none other than Kaleb Lee, one of her teammates from The Voice this past season. The country singer made it all the way into the top 11 before he was eliminated during the instant save round.

But Kaleb wasn’t the only date Kelly brought to the CMT Music Awards! His wife, Meagan, was also there, so Kelly considered her to be her second date.

So since Kelly was calling Kaleb and Meagan her dates, that must mean that Brandon wasn’t at the CMT Music Awards, right? Wrong!

In digging through photos of the crowd, we discovered that Brandon actually was at the awards, he just didn’t walk the red carpet this time around. But photographers still managed to get some sweet snapshots of the Blackstocks, including this one.

All of Kelly’s CMT Music Awards dates got the chance to watch one powerhouse performance from her. She sang “American Woman” in a performance that many hailed as one of the best of the entire night.

But long before that, Kelly made sure that Kaleb got his time in the spotlight when they walked the red carpet together. Watch one of their interviews together in the clip below.

How nice was it for Kelly to bring Kaleb along? She’s clearly invested in helping him make it in the music world!