Lady Antebellum Sends Fans Into A Frenzy With Massive Announcement

By Jennifer Pernicano on October 24, 2018
Advertisement 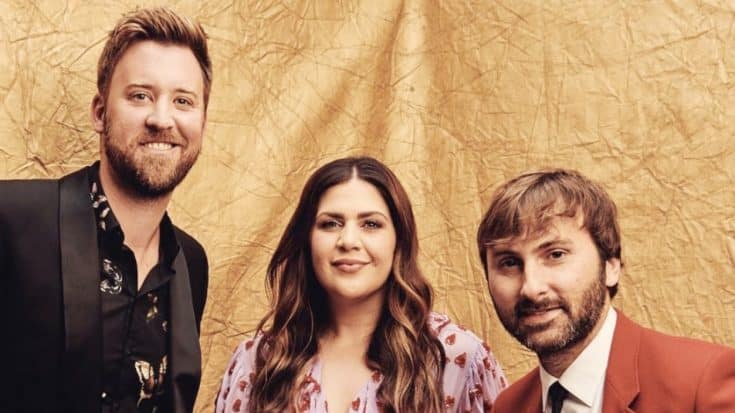 As summer touring season has finally winded down, lots of country artists are already plotting their plans for next year. With acts like Dan + Shay announcing their first headlining tour, Garth Brooks revealing a massive stadium tour, and Little Big Town extending their tour well into next year, more and more singers are announcing their big plans for 2019 and Lady Antebellum is no different.

The first clue the Grammy Award-winning trio gave us about these big plans was on October 22. They shared a glamorous photo of the band walking down an elegant staircase dressed to the nines.

The second clue came less than 24 hours later in the form of a video clip. Still dressed like a million bucks, Charles Kelley, Dave Haywood, and Hillary Scott served up some mysterious looks behind microphones.

2019 is going to be big… pic.twitter.com/XXpQBWsMEq

A fan driving through the streets of Nashville on Tuesday night (Oct 23) came across the restaurant Sinema that had a red carpet rolled out, and the words “Palms” and “Vegas” lit up in big, bright letters. After checking out the restaurant’s Instagram, the fan found out Sinema would be closed for a private event “honoring our friends [Lady Antebellum] and their big announcement,” the post read.

Sinema will be closed this evening for a private event, honoring our friends @ladyantebellum and their big announcement!

People who came across this post immediately thought Lady Antebellum’s announcement would be a Las Vegas residency, and those suspicions were confirmed just hours later by the band themselves.

On Wednesday morning, the “You Look Good” singers shared a video detailing their new Las Vegas Residency, Our Kind of Vegas, at the Palms Casino Resort’s Pearl Concert Theater in 2019. They are set to be the first country act to headline at this venue and couldn’t be more excited.

“Las Vegas has always been a special place for us both personally and as a band,” Scott said. “I’ve celebrated my birthday in Vegas and we won our first award ever as Lady A at the ACM Awards. So, we are looking forward to making it our second home, bringing along some of our friends from Nashville and creating a show unlike we’ve ever put together before.”

Tickets are available to their fan club on Monday, October 29 and on sale to the public on Friday, Nov. 2. Find your tickets here.

Fans were elated upon finding out the news that their favorite country band would be setting up shop in Vegas for a while!

“Getting my gal pals, Vegas, here we come!” one fan wrote on Facebook, as another wrote, “Never been so it’s now on my bucket list for sure!!!!”

“Looks like we’re going to Vegas. ? Set your calendar for the presale!” said another.

From the sounds of it, these dates are going to sell out…and quick!

Watch their announcement in the video below.

Let's do this…it's Our Kind Of Vegas!! Taking over Palms Casino Resort in 2019. More info at ladyantebellum.com