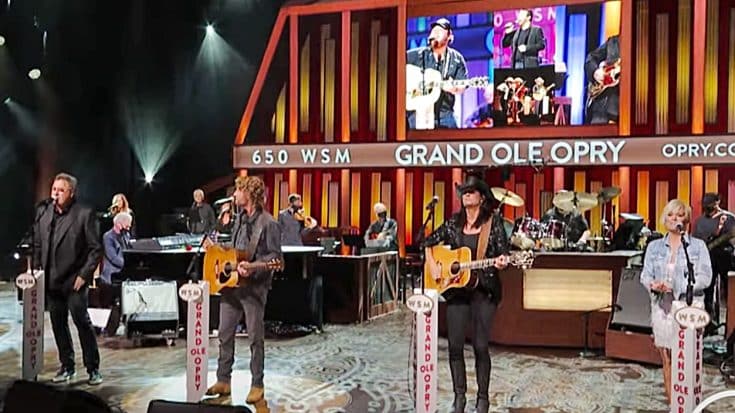 It’s not every day that four country music legends come together. If there’s ever a time that such vocal power should be put to great use, it’s to celebrate the Grand Ole Opry.

Celebrating 9️⃣5️⃣ years! Add this special commemorative 95 years of Opry poster to your collection- share your favorite Opry memory below for a chance to win!

You can already feel the excitement at the Opry House for tonight’s show! Just a few more hours to go…tune in with us tonight at the link in our bio!

To celebrate the 95th anniversary of the legendary music hall, Vince Gill, Dierks Bentley, Terri Clark, and Lorrie Morgan came together on stage to sing “Will the Circle Be Unbroken,” much to the joy of the small audience who was able to attend and the virtual audience watching around the world.

While they performed the song, a video slideshow played in the background showing all the Opry members and their performances over the course of the years.

All four singers are members of the Opry, an honor that’s only bestowed among the highest achievers in country music. The Opry is a running series, and membership in the Opry means that an artist is expected to provide frequent performances throughout the course of their career.

Earning a membership to the Opry is a lifetime commitment, with exceptions being made for health issues. Randy Travis, for example, was a member of the Opry who maintained regular appearances until health conditions prevented him from doing so. He still makes appearances at the Opry, although not as frequent as before.

Watch their incredible performance below.