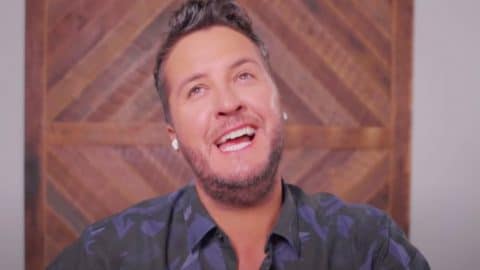 Luke Bryan has quite the catalog of songs. That catalog just got a little bigger following the release of his latest album, Born Here Live Here Die Here on August 7.

The new album contains ten songs, including the hits “Knockin’ Boots” and “One Margarita.”

The tracks that appear on Born Here Live Here Die Here are just a fraction of the songs in Bryan’s discography. It has to be hard for him to remember all of his songs, let alone the songs of other artists!

But during a challenge he filmed for FBE, Bryan proved he’s pretty well-versed in his fellow singers’ songs.

The point of the challenge was to see if Bryan could sing 100 country songs in 10 minutes. Of course, he didn’t have to sing each song in its entirety. Rather, he just had to sing a line or two, and do so correctly (or correctly enough, at least).

Before he started, Bryan was told that a cappella group Pentatonix holds the record for this challenge. They managed to sing 95 pop songs in 10 minutes!

Bryan came out of the gate running, hoping to beat Pentatonix’s record.

Although he soared through most of the tracks, such as “Achy Breaky Heart” and “That Don’t Impress Me Much,” he stumbled over a few songs such as “Wanted” and “Follow Your Arrow.”

Those few stumbles temporarily threw off Bryan’s momentum, and kept him from beating Pentatonix’s record. But he still covered an impressive number of songs, a total of 51!

The clip is pretty comical to watch, since Bryan had some funny quips between tracks…especially when he didn’t know them!

Tune in to the clip below to see how Bryan sang those songs and 49 others in his FBE challenge. He did a pretty good job!